January 4th 2020. I couldn’t sleep that night, it was too long. Way too long. My last visit to Yala was more than thirty years ago with my parents and cousins; as a child. And my memories of that visit always came back blank, time is unkind. This time I had my wife, two boys and a bus load of immediate family. We checked in to Jetwing Yala that afternoon: a cosy structure which snuggles next to some magnificent beach and scrub forest cover. My kids jumped in delight as roaming herds of wild boar foraged around the pool side and langur monkeys executed brazen acrobatics on the branches that dipped in to the pool. A road sign with an elephant image warns the visitor that the 200 meter (or less) hop to the beach from the pool may camouflage nosey elephants; lurking among the trees. It was a delicious thrill, and both the long extending beach (nicely desolate and open to wild animals) and the little trip through the trees make it an adventure in its own right.

The wakeup call at four forty five in the morning from the lobby and the alarm on our phone were in perfect sync. I cast a worried look at my kids. My youngest: almost five was stirring. This was a minor miracle since they slept and woke up late; after all they were on holidays in Sri Lanka and enjoyed some liberties that came with the territory. A rise before eight usually needed a herculean commitment. I would have hated if they missed out. 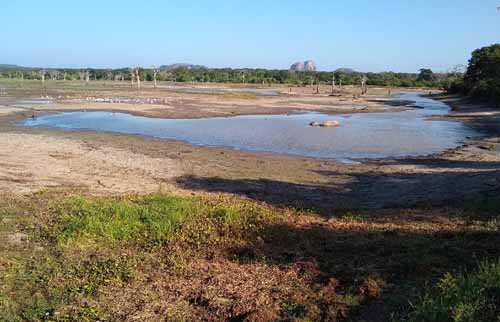 But my grand stories of the impending safari had instilled the ‘wow’ factor sufficiently in to them which I think in turn wormed in to their sleep. We were at the hotel entrance well before the allotted time: five thirty. The forest creatures roamed more freely at dawn, before the late morning heat; this made perfect sense. The jeeps were organised by the hotel; which included the entrance tickets. A point to make is that the rates for the locals and foreigners differ significantly; the popular denomination being in US dollars.

The two open jeeps arrived on time, the kids had shaken off all vestiges of sleep; and we set off even as the first slivers of dawn started to creep out. The first reality check came at the main gate. There was a seemingly endless line of jeeps, even the gate was not fully visible.

“We are number ninety one,” our driver said with some relief. Why such a number should inspire relief in the guy was beyond me.

“There are just over two hundred jeeps in the queue.”

He said as if reading my mind. I am sure our collective sigh could have been heard by those a few jeeps in front as well. Two hundred jeeps? Surely that’s busier than a main road. We were at one of the key gates to Yala: ‘Palatupana’, accessed via the Tissamaharama and Kirinda approach; Tissamaharama is a key city in the Southern province of Sri Lanka steeped in history.

“The first ten or fifteen jeeps to enter stand a higher chance of seeing the rarer residents such as Leopard and the Sloth bear.” 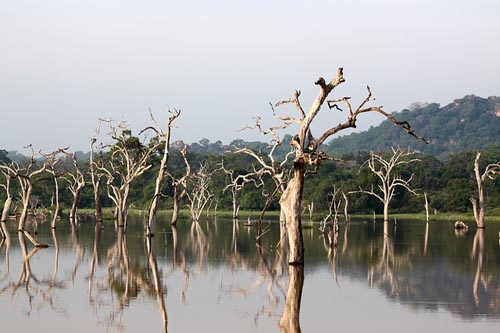 He said with a casual smile which infuriated me even further. I knew it wasn’t his fault. We were all impatient. Finally, after almost an hour in the traffic jam at the gates we were in. Excitement still reasserted itself despite the wait. My kids were standing with frenetic suspense as the jeep lurched dramatically on the uneven tracks. The first thing that grabbed us was the diversity in the land, it’s a different planet. Water holes, lakes, more lakes and the dry vegetation. Uncharacteristic rains over six long months (Global Warming is for real) had created water logged tracks. Multiple species of cranes, water birds, eagles, crocs in ambush were the first to greet us. There were too many to count. My two boys and two nieces helped us out in pointing out some other residents camouflaged by the landscape, jungle fowl and various other birds. Flocks of deer, boar and Sambur grazed peacefully in the pastoral meadows next to the multitude of lakes. Various shades of yellow and green which dressed up the grass created living murals. Another reality check were the well maintained roads, still dirt, but a bit too civilized for me. Another dead give way of the highly commercial nature of the park, perhaps in this particular block. The park is segmented in to five large blocks and our safari was only confined to two of them.

My sister-in-law suddenly pointed out at a distant clump of forest across a lake; quite animatedly. A wild elephant was messing up the branches; all on the lonesome. The drivers chattered on their two-way radios; suddenly more than fifty vehicles flocked around us. It took at least twenty minutes to untangle our two vehicles from the traffic jam. Not good.

Then our guy made a 007 type U turn and we came head to head against a lone elephant, smack bang on the middle of the road. Just one vehicle in front of us. This one was huge, had its left tusk, but none on the right. It ambled at a sedate pace, nonchalant and totally in control. It ignored the jeeps that multiplied around it. Suddenly it made a dash for the nearest jeep, we could see a lonely tourist shaking badly. It slipped its trunk in and pulled out her bag and threw it on the ground. The kids were in tantrums; of delight. It suddenly turned around and approached us. The kids started yelling again, this time out of fear. 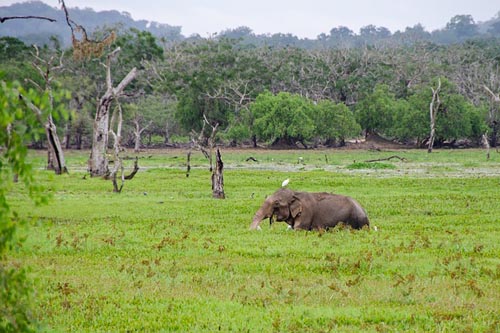 “If you have any food, just hide them under the seats and get the kids to the middle seats.”

The driver warned quite casually with a huge grin, and we had brought plenty of snacks. It passed us with something like an arrogant snort, we weren’t worth it. The kids were trembling, so were we. For the next fifteen minutes it held more than ten jeeps at bay, dominating the road. Not giving a damn, stamping its authority. This was drama, the kind that I wanted my kids to memorise for posterity.

‘Gemunu’, was its name, we found out later. A bit of a loner with a dark side. It had lost its right tusk when it rammed it against a tree; out of lust and frustration.

Suddenly our man behind the wheel started muttering in to his radio. He placed a finger to his lips and turned the jeep round followed by more than six others.

He whispered coming to a standstill near a clearing.

My youngest was motionless and I was truly impressed. He lived in the moment. The seconds stretched, the minutes followed. But no bear or cubs. I saw a tourist in the next vehicle shrug her shoulders with a knowing grin at me. Perhaps this was a trick, her expression suggested. I am still not certain. We did hold our breath for a long while, our hearts racing. Surely that was good. I didn’t mind, a sighting would have been a bonus. But before any sighting comes the adrenalin, the suspense. The driver and the other trackers gave us that.

But Yala has a problem, too much traffic, too many visitors; going in at the same time. Some kind of rationing perhaps? I don’t know the precise solution. But I am also painfully aware of the intersecting industries, an entire micro economy that thrives as a result, the jeep drivers, jeep owners, trackers and the countless hotel and inn owners.

But if the peace of the animals and the tranquility of their habitat are threatened the damage will surely be permanent. 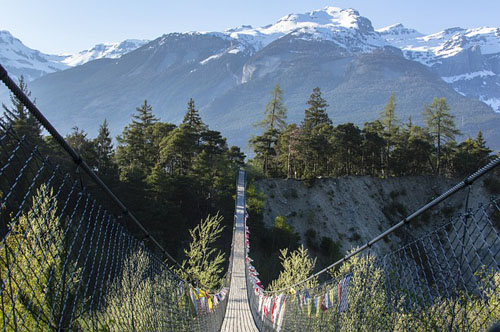 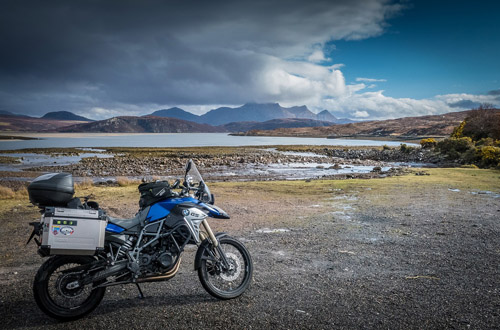