A fiercely whiskered, scowling face, ensconced in a round and horned helmet, brawny and hairy arms holding aloft a double-edged sword which is about to descend on a helpless Irish victim. This illustration was my introduction to the Norwegians or, as called in my primary-school history book, Vikings. Our teacher called them “barbarians”. Arriving in their longboats they had ravaged our coasts, plundering all we held dear: our beautiful women, our gold… A thousand years after the events he still sounded indignant as he read us the story.

With primary school a distant memory I find myself looking again at a map of Norway. I have won a prize: a trip to visit one of the fjords from which those same dreaded longboats sailed. I will stay in a five-star hotel-for the first time in my life. On the map the fretted coastline resembles a monstrous comb with broken and missing teeth. I find my destination Geiranger, on the west coast somewhat south of the Arctic Circle, hiding behind some protective islands and at the end of a 10-mile fjord which is a branch of even a longer one. 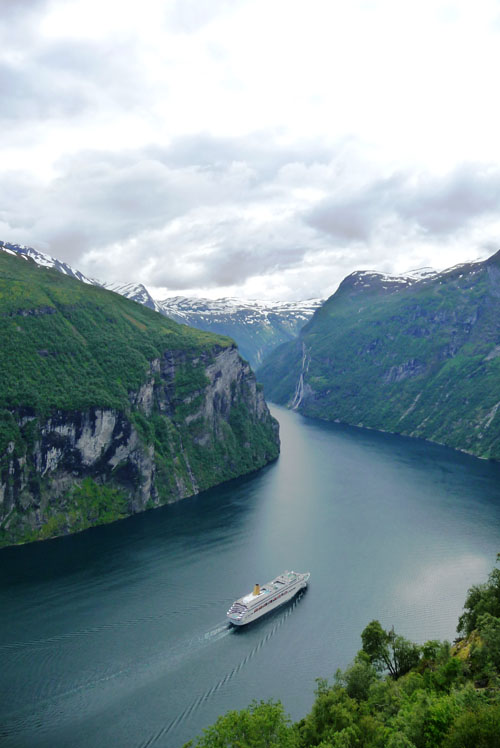 Obviously, things have changed totally from the time depicted in my school history book. Stowed away in museums are the horned helmets, the breastplates and the axes. The Vikings’ fierce looks have been replaced by welcoming smiles as personified by Eric, the Norwegian Air steward, who spends 20 leisurely minutes chatting to us – I have brought my two sisters with me to lend support – about this and that on our flight from Gatwick, though the plane is full of clamouring passengers. It is our introduction to the very laidback style of Norwegians and is a refreshing antidote to the stress and franticness of London Airport.

The plane is full of trekkers and skiers, no surprise given Norway’s reputation for winding mountain paths, plunging waterfalls, snaking fjords and cross-country ski runs. Many passengers, some with children in tow, are obviously concentrated on serious physical stuff. There are many athletic types with trekking boots slung from their rucksacks or indeed already booted, prepared to hit the ground running. We part company at the airport; they to pit themselves against the great outdoors, we to savour some luxury. 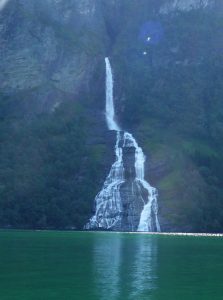 We land at Alesund and take the bus to Geiranger, our final destination. We skirt along a fjord giving us splendid views of the jigsaw effect that an earlier global warming has had on the coast and its mountains. As a three mile thick ice flow, that had covered Norway, retreated back towards the Arctic Circle at the end of the Ice Age it left the coast in jagged tatters. One wonders if, someday, it might not knit back together again.

It’s difficult to do justice to the coast of Norway without lapsing into lush prose: “…towering peaks, tumbling waterfalls, tranquil blue fjords, peaceful mountain meadows, etc.” Geiranger Fjord is a main attraction on this extraordinary coastline and our first view is breathtaking. Our local bus swings around a hairpin bend on the descent to the village and the fjord reveals its beauty.

I’ve had the tingle a few times before: the luminous, shimmery lightness of the Taj Mahal, an early morning sunbeam slowly turning a series of Himalayan peaks pink, the shocking blue of the Aegean. The tingle tells you something is special. I feel it again as I gaze down on the splendour of the fjord, a cleft in a mountain carved out by traumatic upheavals many, many years before. There is a cruise ship lazily moving, silenced by distance, its white wake looking as if brushed in by a Japanese artist. A shiver on the surface of the water catches my eye. Might it be a German u-boat unaware that the war in the North Atlantic is long over? 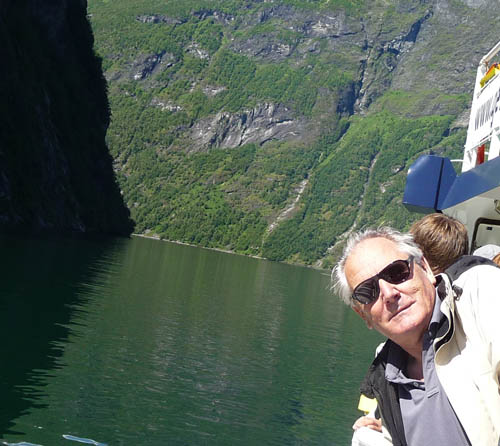 I ask the bus driver’s opinion of the Union Hotel, as we get off. “It’s the best”, he replies simply. This 5-star hotel dates from 1891; it overlooks the fjord and some of the waterfalls. There are three restaurants, three velvety-heated swimming pools – indoor and outdoor which sparkle with invitation. There is a spa with ‘chaises longues’ and spectacular views, massage rooms with attendants to knead every muscle you may have, saunas, bowls of fruit and a bewildering array of perfumed teas within arms’ length. My anxiety is: can I adapt to all this?

I admit to being suspicious of luxury. It seems to represent the poor serving the rich, the deference of the have-nots towards the haves, a reminder of inequality: not so Hotel Union. The hotel staff are obliging without being servile, good humoured without being obsequious: the multi-national team is witty and helpful. I feel any of them could exchange places with me and feel totally at ease. It was to help me cope with the dilemma of luxury that I had invited my sisters to accompany me. They, I knew, could more than compensate for my reticence by embracing totally 5-star everything. The personnel were discreet: shadows flitting noiselessly around looking for whims to answer. 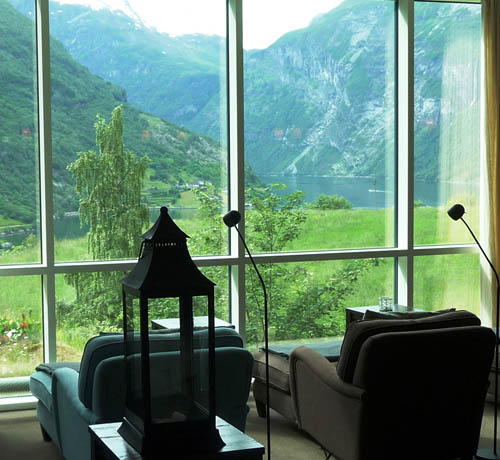 Tourist boats have been coming up this fjord since 1869 and the hotel has welcomed people like The King of Siam, Kaiser Wilhelm, and Queen Alexandra among others.

Hanging on for Dear Life

The next day was sunny and warm for our boat trip on the fjord. Between the steep and, at times, sheer sides of the mountain we moved at a leisurely pace down the cleft in the mountain. The cascading water from the still melting snows of June crashed down in many waterfalls into the fjord and was a type of background music to the four-language commentary. There were several traditional-style farms clinging to the sides of the mountains. They had been abandoned long before but looked pretty and lived in, being maintained for their aesthetic beauty. The loudspeaker told us of the farm children, long ago, having to be tied to trees to stop them falling off cliffs when the parents were away working in the fields.

Flowers and Weeds on your Roof

Traditions die hard in Norway and their houses illustrate this. Visually striking, with their wooden slatted panels, small windows, slated roofs and strong vibrant colours, they light up the landscape. Geiranger still has some traditional houses with tree-bark roofing covered with turf to prevent curling. This also produces the unusual visual effect of roofs sprouting grass, weeds and flowers in spring and summer and seeing people mowing the roof.

We have the opportunity to visit Alesund on the day, rainy and misty, we leave. The city was totally destroyed – wooden houses and a gale blowing – by fire in 1904 and rebuilt in the Art Nouveau style then in vogue. Its beauty is glimpsed when it shows itself, which is only occasionally. Ocean mists cover its face with unnerving frequency. Geir, the manager of the local tourist office, takes me to a high hill to show me the city. It is clothed in a deep mist; suddenly, like a bashful maiden lifting her veil, the mist clears and a flash of sun reveals the city’s loveliness – it is regarded as the most beautiful city in Norway. Then, just as quickly the veil falls again and the town becomes invisible. 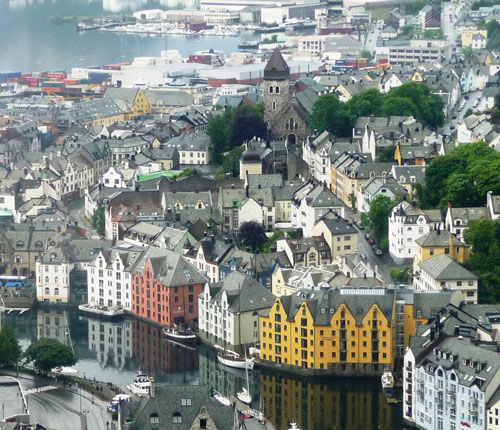 The city, shared between three islands, is surrounded and interlaced with water. Town houses, with their pointed gables, turret style towers and sparkling colours are reflected in the water and give them lightness and grace as if they had sea wings. In the distance, far-away islands and the blue horizon beckon enticingly; easy to imagine the sense of excitement laced with trepidation that those hardy Vikings must have felt more than 1000 years ago sailing towards adventure and the unknown.

Our destination was more mundane. At the airport we reluctantly say goodbye to Norway and the dependable wings of Norwegian Air take us away. As I watch Alesund grow tiny, I think of my primary-school teacher; I would have liked to have been able to tell him how nice modern-day Vikings are. Of course, I’m not sure he would believe me. 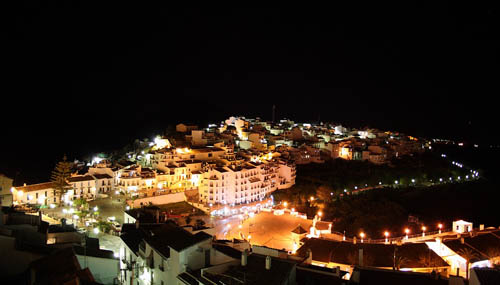 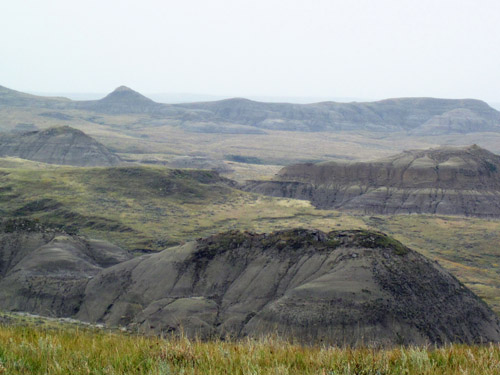