Last February we headed south to La Paz in Mexico’s Baja California Sur. It is an authentically Mexican town on the Sea of Cortez. We needed of a good dose of warmth and sunshine to dispel endless weeks of winter on Canada’s west coast.

Seated at a local café, we savoured our first breakfast. We had a bird’s eye view of La Paz Bay and the fishing boats returning with their morning catch. Just across the street was the Malecōn. This wide waterfront promenade is the town’s showpiece. Tourists and locals alike come here for their morning exercise … some cycle, some walk or jog and some even roller blade or practice yoga. Tall palm trees provide shade to the benches where people sit and watch the world go by. The large, showy flowers of the hibiscus plant add splashes of colour to the walkway. Seagulls bob on the water or hover overhead. We loved to watch the pelicans, too. For hours at a time, these patient animals stood motionless on the rocks hoping for a fishy tidbit. 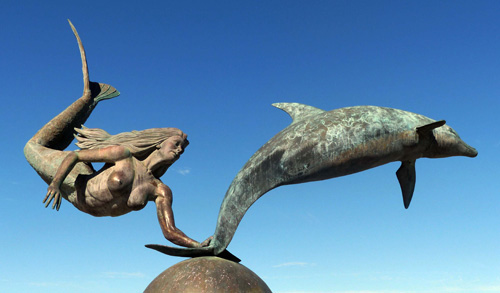 Having lingered long enough, it was time to stroll along the Malecōn. At regular intervals, there were small plazas, each characterized by a sculpture honoring marine life or someone associated with the sea. We particularly liked the graceful rendition of the Mermaid and Dolphin. Facing seaward was a statue of Jacques Cousteau, who called the Sea of Cortez the “world’s aquarium”. The Dove of Peace, locally known as the “Fat Pigeon”, commemorates the donation of Isla Espiritu Santo to the nation. And the Giant Clam evokes La Paz’s once-thriving pearl industry. As evening fell, this peaceful bay was bathed in sunset’s golden glow. 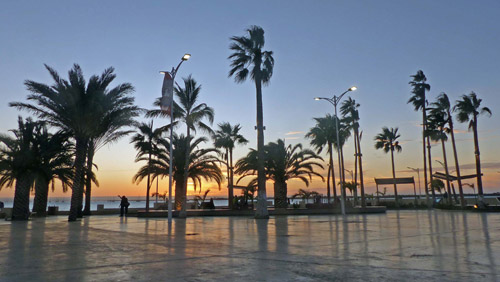 One day we visited the Museum of Anthropology. Our guide, Isaac, explained that eons ago, small groups of tall, dark-skinned nomads and hunters arrived in the Baja. These people lived in caves and created some of North America’s oldest cave paintings using red, black and white pigments, reproductions of which were on display. Over time they became a seafaring people. Eventually, disease wiped them out and by the late 18th century they had ceased to exist. Over the next 150 years the Spanish tried and failed to establish an outpost here until finally establishing a permanent settlement in 1811. For hundreds of years, native Mexicans dove for pearls. The industry became commercially viable in the mid 19th century when the Spanish exported large quantities to Europe. This resulted in over harvesting so that by the 1930s the natural oyster beds had declined never to fully recover. 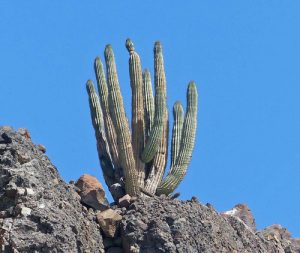 A 30-minute drive brought us to Balandra Beach, a wetlands protected area. Actually it is several separate beaches surrounding a deep bay framed by a backdrop of low mountains. On its rocky cliff tops mighty native Cardon cacti stood guard. Most commercial activity is prohibited although there are a few palapas and the occasional vendor plying his wares. We followed Isaac to El Hongo, Balandra’s distinctive mushroom shaped rock. Almost everyone in our group posed for a photo at this defining landmark. En route, Isaac retrieved a sleepy sea cucumber hidden under a rock and later on pointed out three white ibis pecking at the sand in search of a tasty treat.

Another day we rented a car and drove to Todos Santos which lies almost directly on the Tropic of Cancer. A mission was first established here in 1723 and the town grew up around a natural palm oasis. From around 1850-1950, it became the sugar cane capital of the Baja and provided prosperity to the area. Today, this quaint colonial village attracts both artists and tourists. The six blocks that form the heart of Todos Santos are easily explored. On some streets, party flags fluttered. Artwork depicting faces from the Day of the Dead adorned another. While my husband rested in the shade, I discovered a charming cactus garden and a number of art galleries. The Hotel California was constructed in 1948 by a Chinese immigrant and was occupied by his large family for many years. Over time, it fell into neglect but in 2001 was renovated into an eclectic 11-suite hotel. It exudes an artsy vibe. We enjoyed a typical Mexican meal in the shady courtyard where the resident potter expertly molded many different objects.

Lastly we took a guided trip to the uninhabited Isla Espiritu Santo, a protected UNESCO Biosphere Reserve in the Sea of Cortez. This archipelago, home to a great variety of flora and fauna, is the Galapagos of the Baja. Our diverse group of 12 retired Mexican nurses and six North Americans gathered dockside around 11 am. Before boarding the panga (a typical Mexican open fishing boat that has a shade canopy and an outboard motor), we all donned lifejackets. Straight away, the tequila appeared. These nurses were going to have a whale of a time. 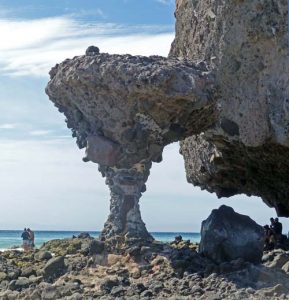 Shortly after the leaving the dock, we spied a trio of playful bottle nosed dolphins jumping for joy in the crystal clear waters. Black frigate birds hunting for prey circled the skies above us. This area is close to the San Andreas fault and experiences frequent earthquakes. Anira, our guide today, pointed out several distinguishing rock formations: El Diablo and “Donald Trump’s face”. In places the vertical cliffs resembled an intricate tapestry. Anira advised that crustaceans and fish of all colours and sizes as well as five species of turtles make this water home. Blue-footed boobies, black jackrabbits and ring-tailed cats are also inhabitants of these volcanic islands. Our captain steered past two small guano-covered islands before powering through a naturally-formed archway. As we passed through, Anira told everyone to make a wish and then look back. Amazingly, the sky resembled the shape of the Baja Peninsula.

We continued on to Los Islotes, a rocky outcrop at the northern tip of the islands, home to a breeding colony of over 650 sea lions. What a rowdy bunch! These hulking creatures have elongated front flippers, small ear flaps and communicate with loud, sharp barks. Some adults luxuriated in the sunshine while the youngsters frolicked playfully. Anira advised that the light brown sea lions were female, the dark brown ones male. The females can live up to 27 years and have just one baby every two years. The colony greeted about 180 new arrivals this past year. At birth the pups have no hands and must be taught how to swim. The males have a shorter life span (15-16 years) as they frequently engage in territorial fights, incur life-threatening bite markings and can have up to eight wives. 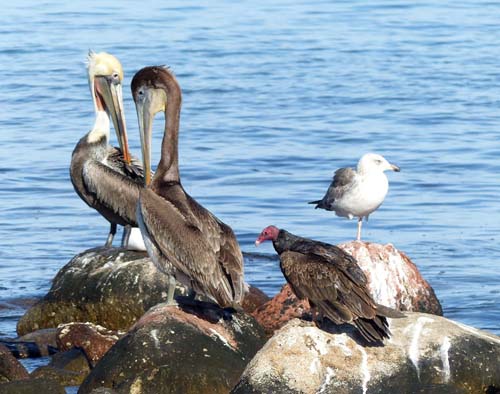 The chilly water temperature deterred our boatload of guests from snorkeling. Instead we headed directly to the white sandy beach at Ensenada Grande. The boat’s crew efficiently erected sunshades and a table. We were served a delicious lunch of ceviche with tostados, sandwiches, fresh fruit and cookies. It wasn’t long before our Mexican nursing friends brought out the beer. One lady entertained us all by singing and dancing with a bottle balanced on her head. Others paddled in the warm, shallow water where trumpet fish darted to and fro. We would treasure this wonderfully scenic day on the Sea of Cortez.

This low-key vacation gave us an opportunity to slow down and unwind. We returned to Vancouver much refreshed and ready for our next adventure. 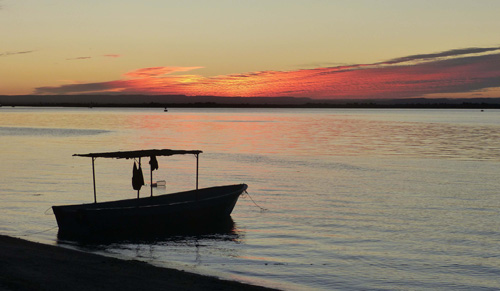 The best Greek islands for a family-friendly holiday 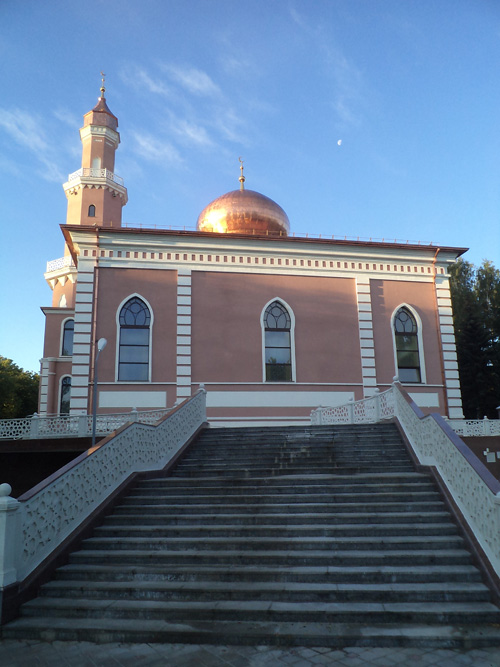 A journey into the religion, past and present, in Minsk, Belarus