I’d noticed this bespectacled figure with a Peaky Blinders-like cap walking towards us when standing at the rear of our twenty-strong group at “Checkpoint Charlie” on Lanark Way in Belfast, Northern Ireland. I feared this passer-by was going to be more troublesome than the individual who interrupted a Jack the Ripper walk in London a few years’ back given this was the location where Republican guides handed over to their Loyalist counterparts between the (predominantly) Catholic Falls and Protestant Shankill Roads.

There’s been Black Taxi tours of the peace walls constructed during the “Troubles” (a thirty-odd-year conflict that’s claimed around 3,700 lives despite it sounding more like a Victorian euphemism for venereal disease) for years, but the unashamedly subjective nature of the Conflicting Stories tour by former combatants proved too tempting to miss.

Victims’ campaigners describe the advertising of the tours as ‘warped’, something I’d echo though to a lesser extent, specifically in regards paying £18 for a place when booking on The Belfast Free Walking Tour website!

My wallet-watcher misgivings were rapidly dispelled when meeting Robert, however, a stocky, beanie-wearing sexagenarian who was formerly a member of the Irish Republican Army (IRA) and who’s now a Sinn Féin activist after moving from the ‘trenches to the benches’. 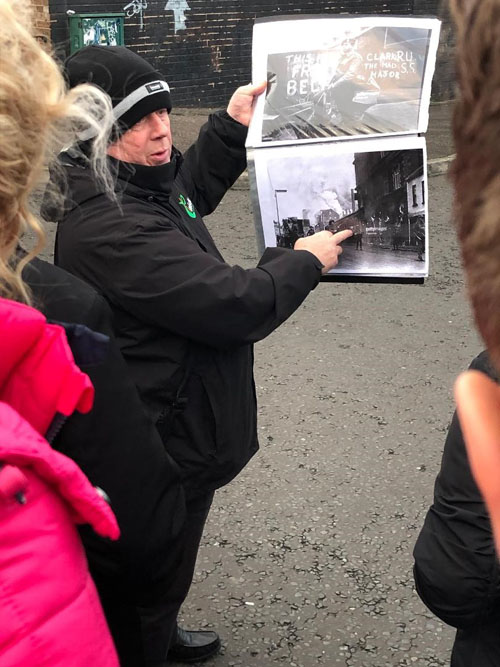 Whether it’s because it was an ice-cold day, I couldn’t say, but I was drawn in with shameful ease by his warmth (something staff at the Titanic Hotel, who are as frosty as the iceberg that struck the eponymous ship in 1912, could learn from) despite the fact my uncle served in the British Army and was stationed in what Robert refers to as the ‘occupied six counties’.

Starting at Divis Tower he transported us back to August 1969, to a time involving the obligatory exchange of bricks and CS gas, and the push for civil rights. Catholics were discriminated against by the Unionist-dominated administration (loyal to the British Crown, fixated on remaining in the United Kingdom, and fearful of plots to join the twenty-six-county-Republic to the south) who presided over what was effectively a pogrom against the nationalist minority. 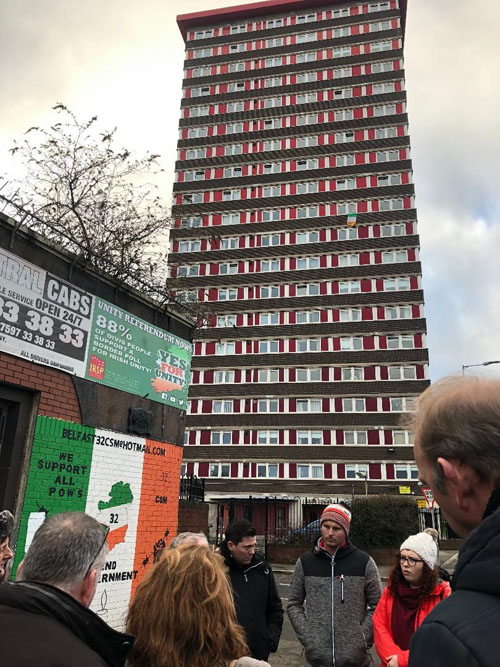 Although Robert’s black-and-white photos are amateur compared with professional ones displayed in, say, Titanic Belfast museum, the latter’s interactive galleries come a distant second to the interaction afforded with an ex-prisoner who was taught Irish by hunger-striker Bobby Sands.

While imprisoned for planting bombs (1976-1988) Robert went on “blanket” and “no-wash” protests, protests he vividly described as we huddled into our parka jackets and periodically tilted heads like curious dogs. The murders of his friend and grandfather proved sufficiently traumatising – radicalising, even – that he joined the youth wing of the IRA before the organisation proper in 1974, aged seventeen.

As our multinational group (resembling a dream team of U.N. peace envoys with tourists from the Basque region, South Africa and Indonesia) continued to make its way westwards towards Falls Road, walking upon colossal flagstones purposely too heavy for rioters to throw at armoured police Land Rovers, Scouse-sounding me was singled out when eyes were directed to the International Wall and a panoramic mural depicting Liverpudlian Joe Gleeson raising the Irish tricolour during the Easter Rising.

Robert didn’t dwell on the past and 1916, surprisingly, but moved onto the “2023 Project” and the successes in extending opening hours of security gates. That Brexit (Britain leaving the European Union) could jeopardise the E.U.-funded “Barriers and Mindsets” scheme left all demoralised.

The spontaneous handshake between Robert and Noel soon lifted spirits (despite the lifting thereof evidently the last thing on peoples’ minds this New Year’s Day), however, for here were members respectively of Coiste and EPIC (Ex-Prisoners Interpretative Centre) working side-by-side, literally hand-in-hand, no longer in juxtaposition to one and other. Right before me, albeit in microcosm, was the uprooting of a sectarian seed that had been planted, nurtured and blossoming for far too long.

Back on Bombay Street, Robert said he’d taken tours on the ‘other’ side to better understand ‘their’ story, something I desperately wished was happening today since – to quote Socrates or was it Shania? – Noel didn’t ‘Impress Me Much’: while I’d not expected a guide as polished as the likes of student-cum-comedian Terry at Crumlin Road Gaol, he was remarkably rusty regardless of tours being eighteen-months old.

Against the clear blue sky of Belfast, which is dotted with the distinctive orange tail of easyJet planes flying over the capital’s lush green hills and towering yellow cranes of shipbuilder Harland & Wolff, Noel appeared grey. Fortunately, his rough charms began to shine as the afternoon light dimmed. 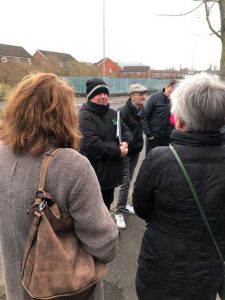 A self-described former ‘sectarian bigot’, released under the terms of the Good Friday Agreement of 1998, loquacious Noel is more candid than charismatic: he’s the type of fella you wouldn’t need to pay a penny to for his thoughts; indeed, he’s the generous sort who’d give you his last, notwithstanding being an armed robber for the Ulster Volunteer Force (UVF).

The history of Loyalism is little known compared with that of Republicanism, which is routinely romanticised, yet remains an important thread in the tapestry of the conflict: a thread told under fluttering Union flags and beside gable-wall murals (competing for moral superiority) honouring the dead of WWI.

I’m ashamed to admit I thought Noel an ignoramus when referring to Bloody “Friday” in 1972 which (occurred six months after the much-chronicled Bloody Sunday, when British paratroopers killed 14 marches during a rally in then-Londonderry) claimed his friend’s life and proved a turning point in his. Ten others died after 26 bombs were detonated in 80 minutes. Hereafter streets became urban killings fields for the next two decades.

Walking westwards on Shankill Noel reminded us to ‘watch our backs’ (something that had a different meaning ‘back in the day’, he joked drily) as locals went about their business. With the lightened mood turning dark through the tragic details concerning the bombing of a fish shop in 1993, I thought the tour ought to be renamed Conflicting Emotions. Standing at Shankill Memorial Park I observed that there wasn’t the hushed reverence of the Garden of Remembrance on Falls, although this was arguably because my fellow tour-goers were simply concentrating on maintaining blood circulation by stamping their feet.

Shattered yet standing after a three-and-a-half-hour, three-odd-mile walk I wet my whistle in the Europa, once the most bombed hotel in the world. Here I mulled over Noel’s concluding remarks that peace is a ‘desire’ for Loyalists/Unionists, whereas it’s a ‘strategy’ for Republicans/Nationalists. If so, a “hard” border after Brexit may cause dissident Republicans to blow the dust off their guns, thereby guaranteeing there’ll not only be KFC but probably UVF, possibly RHC (Red Hand Commando), presence on the Shankill.

That said, HM Government’s £300m peace-building, post-Brexit pledge should guarantee (together, not insignificantly, with monies from tours) the soft-power work conducted by Robert and Noel – who persuade rather than pressurise youths to coexist peacefully – continues to prevent recrimination replacing reconciliation. 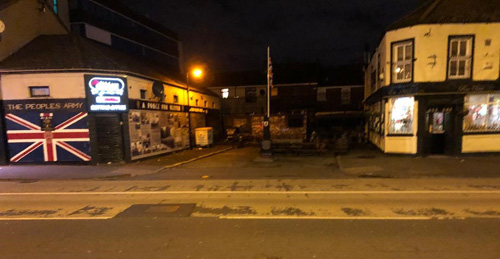 A shorter version of this article was published online, in 2019, at TravelThruHistory. 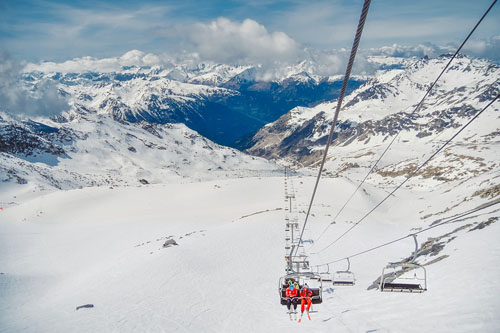 Chill out with a cool French snowsports holiday 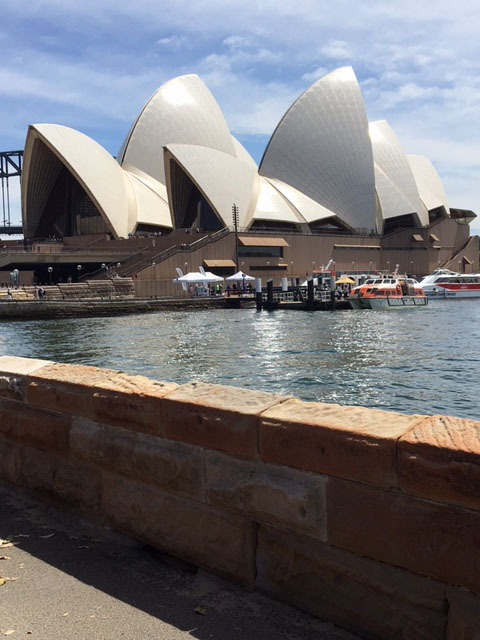 Surfing Covid on a final tour as Australasia shut down