Portugal, a leader in keeping Covid-19 at bay is one country that may open early to international travelers. Many people head for the well-known and beautiful Algarve; for the history-steeped wine-producing areas of Porto and the Douro Valley or to walk the Portuguese Camino.

For something different, we suggest a visit to the working seaport of Peniche and to nearby Nazare with the highlight being a night or two in the Berlinga archipelago on Berlinga Grande, one of the world’s first protected nature reserves. A quick hour drive from Lisbon will get you there.

Our base is the Barcos a Vista guest house in Peniche where the owners immediately feel like family and it’s easy to walk everywhere from here.

Carry a windbreaker as this is surfer country. Peniche lays claim to tall, perfectly hollow waves created by some magical mix of wind and water; while Nazare a few kilometers away is known by surfers the world over for waves that may reach 100 feet high and where a World Record for surfing was firmly established.

On arrival we head to the waterfront to book a boat trip to the archipelago for a day or two away (weather permitting), giving us time to explore Peniche. Alex, owner and captain of Berlinga Live has the boat and safety considerations that attract our business. Visitors to Berlinga Grande are limited to 500 per day, so each company can only bring a couple of boatloads of people a day. Many are open Zodiac-style boats. Only a few hardy fisher families are allowed to live on the island. 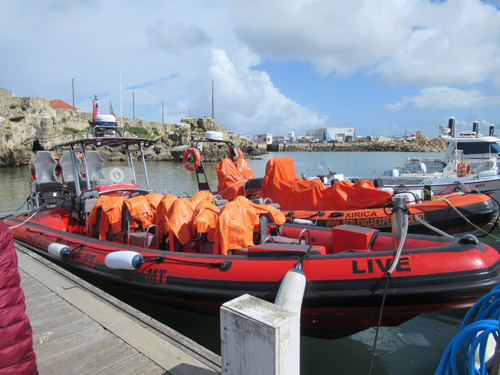 April was the month we had set aside for Portugal. I tried and tried on-line before the trip to book a few nights at the accommodation on Berlinga Grande, longing for the wild solitude presented by this rock jutting out into the ocean. What we didn’t know is that the Atlantic is too wild until mid-May for most boats to make it the 25-minute ride from Peniche. A ferry runs during the summer months. The main accommodation on Berlinga is the 16th. Century São Jão Baptista Fort which has been converted to a very basic hostel.

Alex can take tourists to the islands during out of season times if he feels it’s safe. On the day we go, the seas are considered calm. The day before, a fish boat issued a distress call, disappeared, and was still missing. A community on edge, waiting. 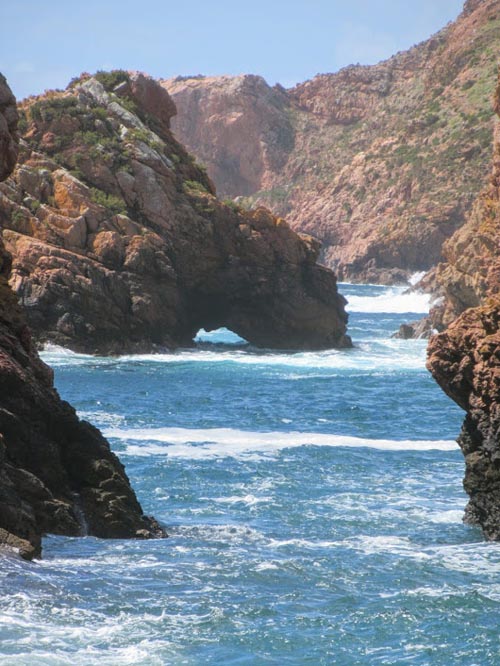 The water in the harbor is deceptively calm. We get out into the Atlantic and there are big swells that seem to go every which way with no discernable pattern.

A bigger than usual wave comes at us and Alex slows the boat down as we ride its face up and up, then drop down on the other side of it. Other times he seems to surf the boat along the crest of the wave. What a ride. Thankfully my anti-nausea patch is hard at work.

It’s only about 10 km between the lighthouses of Peniche and Berlenga. If you are lost at sea near here you will know that the lighthouse in Peniche has a red light and on Berlenga has a clear light.

We disembark at Berlenga Grande with the guide for a hike around the island and Alex anchors out at sea to wait for us.

Its spring now and the hillsides are splashed with yellow, pink, and white flowers while the seagulls are busy with mating and nest building.

We are told that before the continents split that Berlenga was part of North America. This place has been occupied by many countries over the years. We walk the remains of a Roman lighthouse. In the 1500s monks established a monastery to help with navigation and victims of frequent shipwrecks. One shipwreck here is only 7 meters under the sea, so diving is a popular activity too. 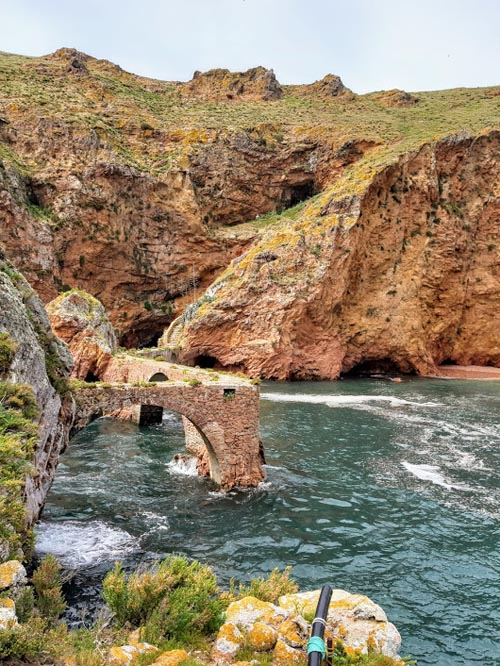 The hike is breath-taking. This is an amazingly beautiful place: wild, barren, craggy, and free. From Berlinga Grande it’s a steep walk down a single path, some rock steps, and over a bridge to arrive at São Jão Baptista Fort.

Normally after the guided walk, Alex would boat us around the island to see some of the sea caves, but the Atlantic is too fierce today. We learn later that there was a second bunch of tourists to go out after us but he cancels, feeling it’s not safe.

It was quite a feat trying to get back into the boat. We had to go two by two while the others stayed back. Sometimes we were held up as a big wave came in and Alex couldn’t keep the boat by the landing plus we had to quickly retreat as the water crashed hugely and forcefully over where we had just been standing. 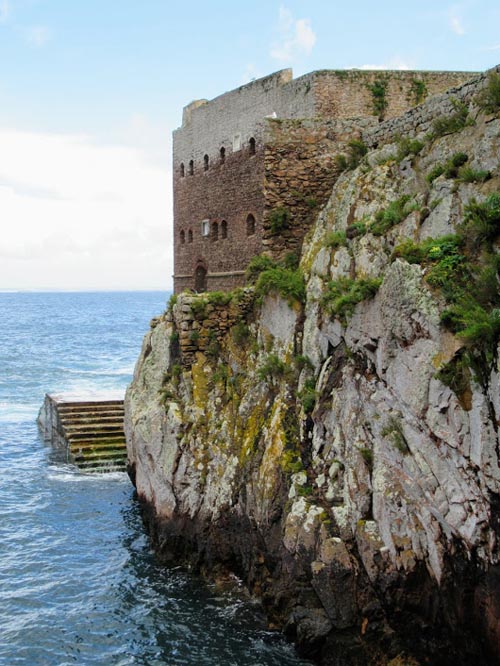 The swells are big on the way home, Alex has some fun, going fast and surfing the boat over the waves. He seems to be a very skilled captain and the engine of this inflatable has lots of power. He invites Paul to sit with him at his wheelhouse for the journey back.

The main attraction in Peniche is the star-shaped Fortaleza de Peniche (built-in 1557). Unfortunately for us, it’s closed for major renovations.

From behind the fort we discover a footpath that leads to a clutch of tiny fisherman’s homes built precariously on and into the huge rocky shoreline with big waves pounding at their foundations. People here are proud of where they live. We see beautiful landscaping and gardens everywhere. It seems that soil must have been hauled onto the rocks to accomplish that feat. 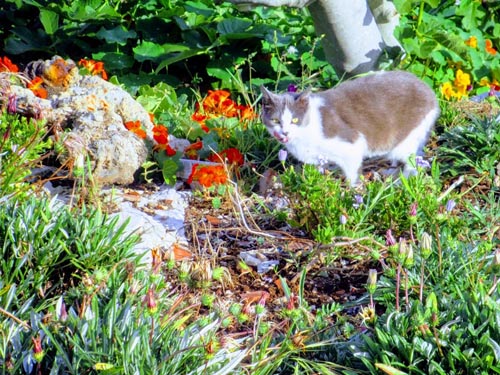 Going to the port to watch the fishers bring in their catch is another interesting activity. The screaming of the circling gulls looking for an easy meal and the smells of sea and fish are integral to fishing communities everywhere. Downtown seafood restaurants have dishes made from fresh, caught-that-day treasures to please everyone, perfectly paired with affordable Portuguese wine.

We never made it to Nazare but talked with several people later who were glad they did. The golden sand beaches are second to none and you can lose yourself in time to the narrow, winding cobblestone streets of the old town. For all its bluster about big waves the city-front beach is calm and protected. 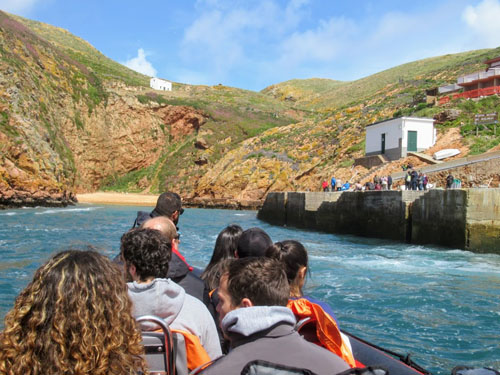 All photography by K. Paul Christensen 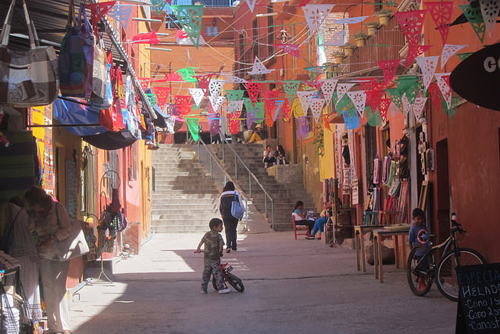 Tasting Greek wines in the hills near Olympia