Back when I was looking into travel to Bangkok, I missed the fact that its Old City was patchworked with canals. It wasn’t until our taxi from the airport dropped my wife Mardena and me off near our hotel that it finally sank in. The short walk to the hotel ran along a lazy, tree lined waterway where two or three men lounged against a balustrade under an umbrella of trees and another dozed on a shaded bench nearby. The water was brown and motionless, but in the sultry noontime heat, under a canopy of leaves, it all looked pretty appealing.

The guidebooks I used and the internet sites I visited had said next to nothing about canals. Both of them concentrated, naturally, on the sights most tourists would be interested in like the Grand Palace and the major temples. Those sights were impressive, but Mardena and I had seen plenty like that on this and other visits to Southeast Asia. For us, looking back on our time in Bangkok, it was the waterways we remembered most. 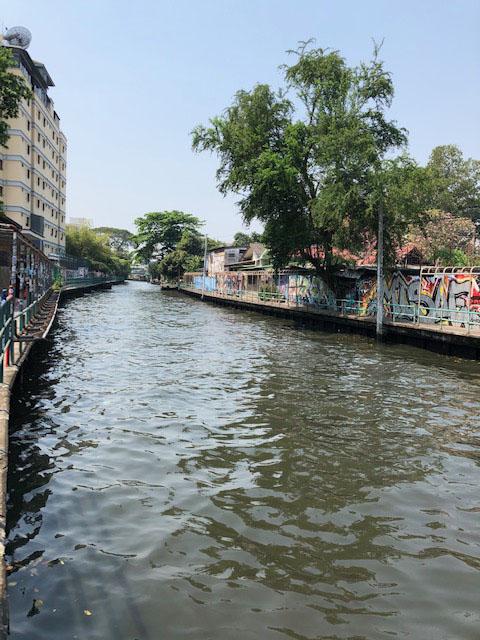 Bangkok’s canal system was built starting centuries ago to improve the city’s transportation, irrigation, drainage, and defenses. Most waterways have been filled in now and replaced by roads, but the largest ones are still an important means of transportation for many Thais. The smaller waterways, on the other hand, apparently aren’t considered important for much of anything; one fairly typical magazine article I read, for example, dismissed them, simply, as “dirty and dismal.” The little canal near our hotel never struck me that way, but then the condition of the water didn’t matter much to Mardena and me, anyway. What did matter, as it turned out, what made our stay on the canal memorable, was the closeup view it gave us of day to day life in Bangkok’s Old City.

After checking into our room and dropping off our bags that first afternoon, Mardena and I headed back out across our hotel’s shady courtyard, through the gate, and down the paved footpath that ran along the canal to the commercial street a quarter mile away. It was a trek we’d end up making over and over during our three days in the city.

The canal—maybe fifteen feet across–ran between stretches of one-story residential buildings that bordered both sides of the waterway—although calling them buildings might be overstating things. The dwellings were ramshackle, made of wood and sheets of corrugated iron, partially rusting, that served as roofing and siding. Invariably when we strolled along the walkway we’d have to detour around a mother cat and her calico kittens stretched out on the sun baked footpath. A depleted-looking spaniel sometimes sprawled alongside them in the shade, and an occasional chicken pecked halfheartedly at cracks in the pavement. In Bangkok’s steamy mid-winter heat, animal life pretty much slowed to a stop. 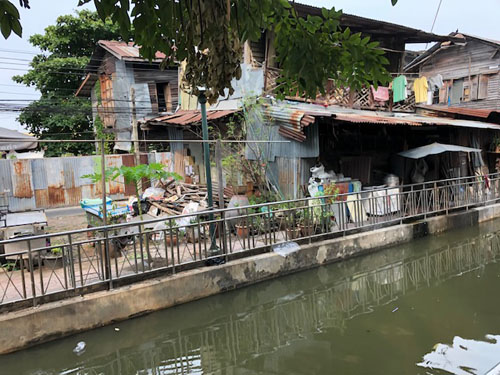 But people’s lives carried on. The weather in Bangkok is hot year around, and probably because winters are dry as well as hot a lot of the activity in the neighborhood took place outdoors. Early in the morning in the small cobbled courtyard next door to our hotel, children kicked a ball around while women in sarongs sat and talked, and a thin old woman in a nightgown stood alongside them stirring a pot. A time-battered washing machine labored noisily just outside their doorway. Nearby, two young men in rumpled shorts, faded tee shirts, and sandals leaned against their motorbikes and chatted a little before climbing on the bikes and puttering off.

On a couple of mornings, across the canal, a teenage girl in dark shorts and a white blouse was bent over the waterway energetically scrubbing a giant cooking pot. A few doors down, billowing soap suds poured into the water from a drainage pipe. We could see into one family’s dark, garage-like room where plastic grocery bags full of stored goods sagged from the rafters like big water balloons.

When we passed along the path in the evenings, members of a family down the canal from us would sometimes be sitting around on white plastic chairs watching a young man cook meat over an outdoor grill. On our way back at night we’d see dirty dishes piled next to the grill waiting to be washed.

Life in the neighborhood was humble, but despite what those magazine articles said it never seemed “dismal.” I’d seen dismal. The dreary apartment buildings that served as refugee camps in parts of the Palestinian West Bank, for example, fit the bill. Viewed from outside, their dark windows looked so bleak and lifeless that they brought to mind the empty eye sockets of dead skulls. By contrast, the canal that ran past our hotel, with sunlight flittering on the water through the leaves, sometimes seemed positively atmospheric.

But there was nothing romantic about it. Thailand notoriously suffers from one of the greatest gaps between rich and poor on the planet, and people on the canal were clearly not among the rich. And who knows how cramped things got during the rainy season when families had to huddle together more often inside their lodgings. But unlike in those moribund apartments on the West Bank, life on the canal perked along, and stagnant as the water was and shaky as the housing looked, the neighborhood was shaded and peaceful as well.

On our last day in Bangkok Mardena and I finally got around to putting together a self-directed tour on one of the long-tailed motor boats we’d seen plying the Saen Saep canal, a busy transportation waterway that ran through the middle of Bangkok. The boat was one of a fleet set aside for visitors. The boats stop at seven piers where, with an all-day ticket, passengers can get off, explore the surrounding neighborhoods, then get back on another boat and continue on their way. 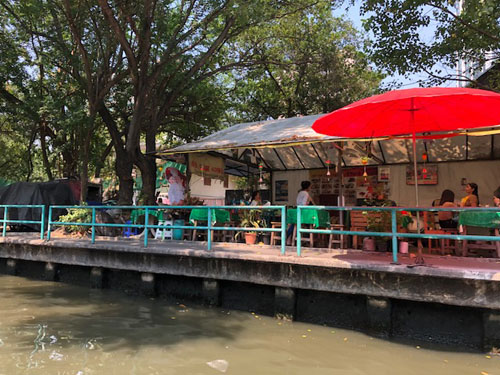 The boats run east and west between Bangkok’s Old City and New City, stopping off near points of interest, mostly commercial, to tourists. Heading east through the New City they make stops alongside a giant outdoor clothing market; next to the Jim Thompson House, a stylish outlet for quality Thai silk products; and close by a trendy shopping area of malls, supermarkets, and coffee houses. Near the final stop, the boat passes long stretches of makeshift living quarters that, thanks to the plastic sheeting used to supplement the ubiquitous wood and corrugated iron, look like they’ve been cobbled together even more haphazardly than those near our hotel. Still though, the dwellings aren’t dreary, in part because the canal is brightened all along by leafy trees and pots of colorful flowers.

The Old City portion of the canal, a bit more upmarket than the New City portion, is fringed by apartments, guesthouses, cafes, and more flowers. The last, westernmost, Old City stop is at the conjunction of the canal and the Chao Phraya River. It’s a place to get out, relax under the trees, and watch the busy river traffic ply its way up and down the immense waterway.

To me, sightseeing along the canal was much more engaging than sightseeing from a city tour bus. Bus tours I’ve taken have tended to focus on static monuments and historic sites; the Saen Saep boat, by contrast, took us past the diverse architecture of workaday Bangkok: tumbledown housing, small warehouses and manufacturing plants, markets, apartments, and eateries. Touring the canal brought us much closer to the landscapes of everyday life than any city bus tour I can remember. 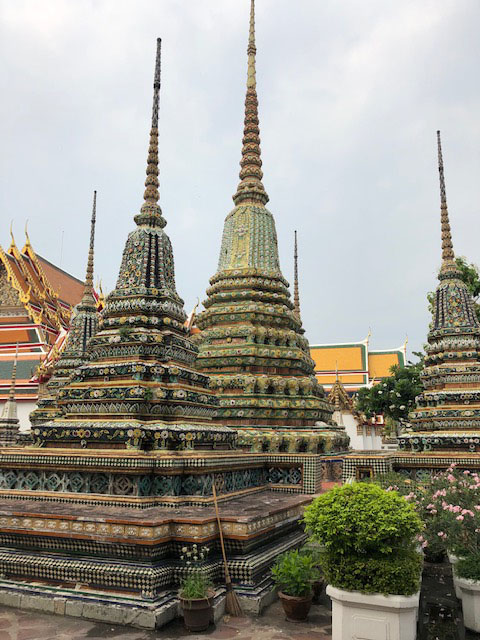 To say that Mardena and I even scratched the surface of life along Bangkok’s canal system would be a wild overstatement. There’s a lot more to the waterways than we had time to see, both in the Rattanakosin section of Bangkok where we stayed and in the Thonburi section of the city across the Chao Phraya River. But making our home base along a residential canal and exploring the city from a major waterway was enough to whet our appetites. If we’re in Bangkok again, exploring its canals will be a priority.

Note:
The all-day “tourist tickets” we bought for the Saen Saep canal are available at Phanfa Leelard Pier under the Phanfa Bridge across the canal from Mahakan Fort. The 200 baht ($6.35) tickets were relatively expensive, but, running low on energy at the end of four weeks of travel, we opted for convenience over economy. It’s possible, though, to put together a cheaper tour of the canal by paying for each ride separately—10 to 20 baht per ride.
We stayed at the Innspire Bangkok (www.innspirebangkok.com), a small hotel on the residential canal described in the article. Double rooms run $40 to $47 per night. It receives top ratings (4.5 to 5 out of 5) on every lodging site I checked. 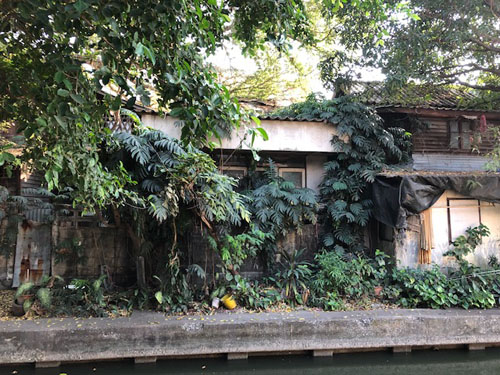 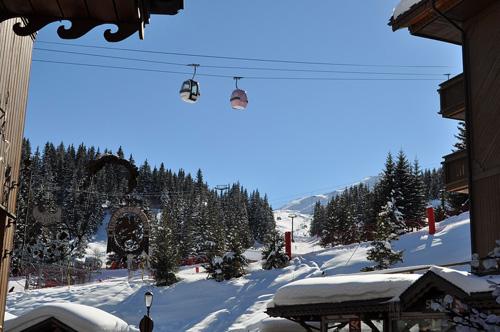 Courchevel: Alpine luxury whatever the season