There are times when you escape for just a few days but feel like you’ve been away for a week.

This happens during our trip to West Sussex. At Petworth House we learn about the painter JMW Turner. The owner of Petworth House, Lord Egremont commissioned and owned a number of Turner’s paintings and eight are exhibited. There are some fine examples of his work and others that have seen better days. For instance, there’s one with a ship carrying convicts about to set sail for Australia and in the foreground there’s a boat of women, who have just said goodbye to their men. “It’s unusual for Turner to produce such a piece,” we are told by our well-informed guide. He usually stuck to sea and landscapes. In this piece the sky is almost white with age. In other paintings a torch is a necessity to spy almost hidden workers and bridges. Another has cattle walking in the sea about to drink, clearly a staged piece that was not realistic. “Besides, the woman is out of proportion, too.” Mike Leigh’s 2014 film Turner starring Timothy Spall, who won the Best Actor Award, has really put Petworth on the map. It was filmed at Petworth and a video tells how Timothy Spall had a crash course in painting so that he could successfully play the part. 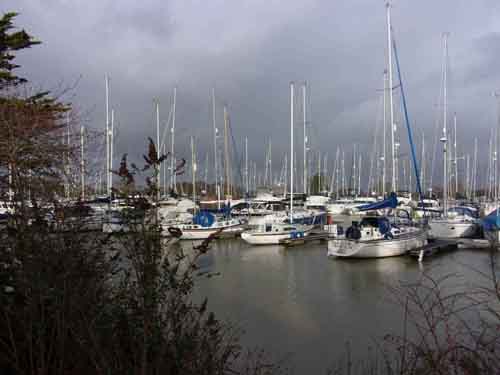 About an hour from Petworth is The Salterns where there is a selection of luxury apartments. On arrival we park in a secure car park and savour the view of the boats moored up. It’s windy, which makes the masts rattle, adding to the atmosphere. Our apartment has two large double bedrooms, a bathroom and an en-suite shower room. The first thing that Harriett (9) and Heidi (7) notice is the iPad and they’re quicker at operating it than me. The modern kitchen/sitting room has views over the marina and outside there’s a patio area. Finished to a very high standard there is an overwhelming desire to relax. The massive comfy sofa easily accommodates the five of us and the children love the choice of channels available on the television. I discover Netflix and watch The Irishman starring Robert De Niro and The Two Popes with Anthony Hopkins. The beds must be the most comfortable that we have come across on our travels.

About 20 minutes away is West Wittering where there is a lovely beach and a selection of eateries but it is at Three Veg where customers find the healthy choice. It is popular. It’s just been refurbished and there’s a welcoming rustic charm to the restaurant. There are five staff including Pippa, the manager. Apple juice for the children, a Peroni beer for me and a white wine for Caroline. A focaccia starter with olive oil is followed by pasta and tomato for the children while Caroline and I go for the squash and spinach risotto. I often find that vegetarian food is not filling and satisfying but we all enjoy our meals. The children have just enough room to tackle the ice cream desert while Caroline has raspberry sorbet and I have to try the vegan chocolate brownie and caramel ice cream. We certainly don’t need to eat anything else.

An absolute must to visit is Amberley Museum, just under an hour away. We discover over 150 years of South Downs working history in what was once a busy chalk quarry and lime works. The 36-acre site is easy enough to walk round but there’s a bus and a train, at half hourly intervals. Run mainly by volunteers this is an absolutely fantastic full day out with something for everyone. The highlight of the day is when the children have a go at woodworking; even little Henry (4) dons a visor and gets stuck in shaping his piece of wood on a lathe. He loves it and makes a windmill while Harriett and Heidi each create a bee. What fun and a lasting memento. 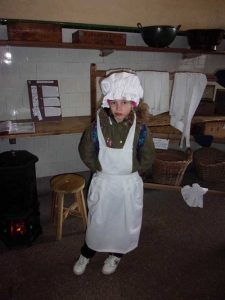 We meet a broom maker, “a dying art”, we are told because of technology like leaf blowers. He makes a broom in minutes before our eyes and Henry enjoys running around with it like a witch on their broomstick. There’s a stained glassmaker, lead workers, woodturners and a print room where the children print their names. It is so inspiring. When we visit the lead workers we learn about lead fire marks that were fitted to the front of insured buildings so that if there was a fire the fire brigade knew which ones to put out. If there was no insurance the building was burnt to the ground. This came about after the Great Fire of London, which started in a bakery in Pudding Lane in 1666. A fascinating history lesson for us all. We see a lead planter being constructed as a commission for RHS Wisley.

The bus museum is home to 12 buses ranging from a 1914 hybrid (and we think this is modern technology) to a 1995 one. There are also three fire engines. The television and radio exhibition is interesting and the children try their hands at a spot of Morse code. There’s so much to do it is necessary to return.

From here we go to The Capitol, an attractive glass fronted building, housing a cinema and theatre, at Horsham. On our way to the cinema there is an art exhibition with affordable art for sale. We watch Sonic the hedgehog starring Jim Carrey which grips our attention for the best part of a couple of hours.

For dinner we head to Jupps Fish and Chips in Burgess Hill. This business was established in 1961 by Martyn’s father “who had lost his job on the railways because of gambling”. Martyn now runs the businesses with his wife Marie. “He bought the freehold for £400 and worried about paying it off,” says Martyn over the counter, as we order dinner. “I was born upstairs and soon afterwards my mum put me in the pram and I was out the front meeting customers, so it was inevitable that I would take over running this business sooner or later.” Martyn shows Harriett and me his potato skinning and chip making machine which converts a sack of spuds into chips in minutes before our eyes. “We serve 8,500 customers a week and get through 2 tonnes of potatoes each week,” he reveals. It’s not surprising the business is so popular, the fish and chips are, we conclude, the best we have tried because they’re not greasy and that’s very refreshing. We’ve tried Rick Stein’s, too.

When away Caroline needs to rest and the bath in the apartment certainly helps with this but a haircut, I am told, also makes her feel better. At Regis Salon in Crane Street, Chichester she is treated to a cut and finish with Gemma, who is knowledgeable and even gives Caroline a soothing head massage. It’s all carried out in under an hour. 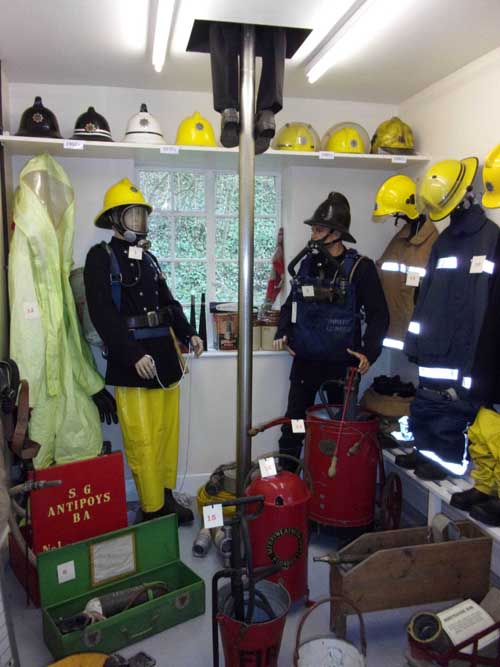 Which gives us time to pop into Pallant House Gallery and enjoy some great works of art. There might not be any Turner but there are some great names often only associated with London galleries from David Hockney to Howard Hodgkin and Henry Moore; I do like his smaller sculptures. There’s some splendid work here and we’re grateful that little Henry and his stamping feet let us take in everything, if a little quickly to satisfy the impatient little urchin.

Watch the videos at www.travelwriter.biz 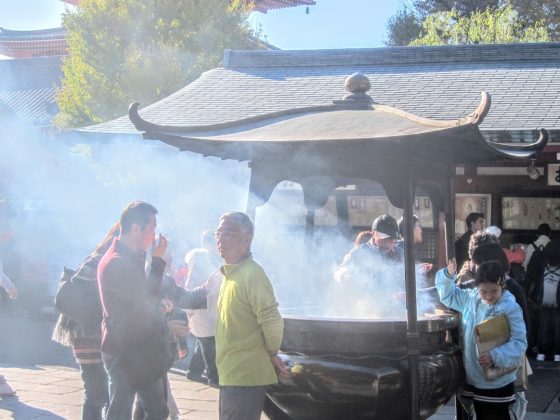