To me, the name Phnom Penh had long had sinister connotations. Most of what I remembered about the place was that it had been a hell-hole back in the 1970s when Khmer Rouge insurgents had come to power and inflicted a reign of terror on Phnom Penh and the rest of Cambodia. I didn’t have a clue what Phnom Penh was like now, which is why I wanted so much to see it. I was curious whether it had managed to recover from that dark time.

My wife Mardena and I would have only a couple of nights in the city, time for about a day and a half of sightseeing, but that was fine with me. The tourist sights, with one notable exception, were not a priority. I’d seen enough temples, palaces, and museums to last me a lifetime. I just wanted enough time there to get a feel for the place.

The one exception, the one sight I did want to see, was one that put Phnom Penh in an unfortunate class by itself. That was Tuol Sleng, the prison where the Khmer Rouge had tortured and killed thousands of their Cambodian countrymen when they ruled the country from 1975 to 1979. My curiosity might have been slightly ghoulish, but there was no denying that Tuol Sleng was, legitimately, an essential part of Cambodian history. 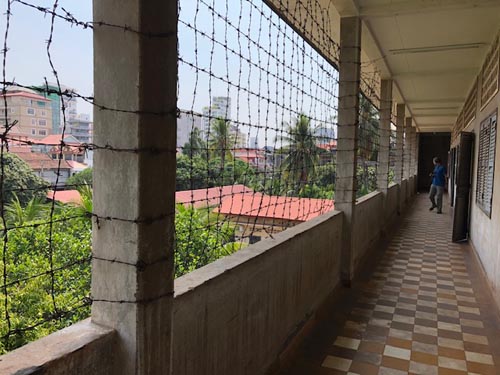 The boat that brought Mardena and me from Saigon to Phnom Penh dropped us off on a hot Thursday afternoon at a pier on the Tonlé Sap river, the wide, milky waterway that ran alongside the city’s downtown. It was early February, and although the coronavirus was becoming a concern, it hadn’t affected tourism yet. While we stood with our packs along the busy riverside boulevard waiting for a ride to our hotel, a young woman selling scarves from a sidewalk cart walked over and with a friendly smile set down two plastic chairs for us to sit on. It was a surprising gesture, a bit of random street kindness, something I didn’t remember having experienced anywhere before.

As soon as we’d dropped our packs off in our room Mardena and I headed back out into downtown Phnom Penh. The street side businesses looked about like the low-slung shops, bars, and cafes we’d seen in other Southeast Asian cities—dark, cramped, and grungy, at least to Western eyes—with a multistory office building thrown in here and there. But there were noticeable differences. One was all the shiny new SUVs and Mercedes that clogged the downtown streets. I hadn’t seen anything like it in any Southeast Asian city. As I learned later, vehicles like those had become popular status symbols for an emerging Phnom Penh middle class; they were also perks for Cambodian government employees. 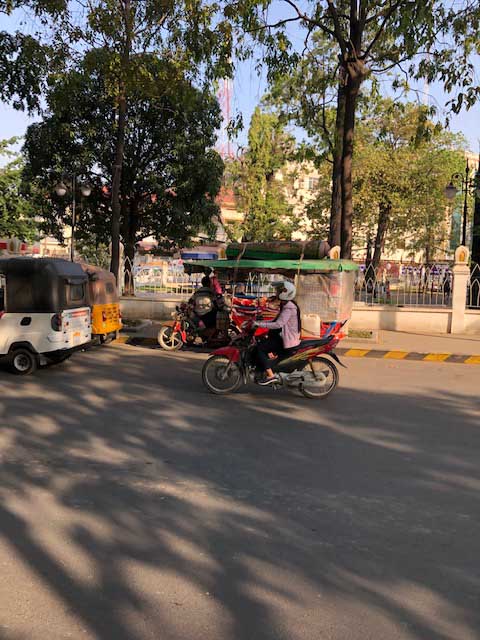 Another oddity was all the white-haired old Western expats, exclusively male, scattered around the sidewalk bars and cafes, more than I’d noticed anywhere except maybe Chiang Mai in Thailand. Mardena thought they were probably sex tourists. I actually liked that idea; it fit my preconceived stereotype of Southeast Asian cities as exotic dens of decadence. But of course, I had no idea what the reality was. I suspected the men were mostly just expats there for the warm weather, cheap living, and cheap beer.

And then there were all those policemen in blue uniforms and soldiers in brown uniforms stationed around the downtown streets—more conspicuous than I’d noticed anywhere else in Southeast Asia. I wondered if there was an expectation of trouble or if it was just standard operating procedure for Cambodia’s authoritarian government. The country was supposedly a democracy with regular elections, but through a variety of stratagems, some allegedly brutal, its current president Hun Sen had managed to keep himself in office for more than thirty years. 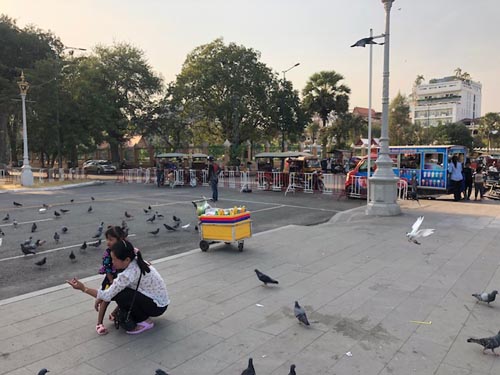 Based on just a few hours of walking around, my observations couldn’t have been more superficial, but what I realized as we moseyed along was that I liked the city. I liked all the trees that lined the downtown streets and the open, airy feel of the place. The riverfront wasn’t the thing of beauty some website had led me to expect—the riverfront boulevard was crammed with traffic and the view across the river was stark and barren—but the expansive outlook did enhance the sense of openness.

And I liked the people we’d run into. Walking back to our room that evening we stopped at a busy corner coffee stand where a friendly, smiling lady barista took our order. We sat with sweet Vietnamese coffees at one of the two little sidewalk tables and watched cars, SUVs, and motorbikes hurry by. Just before entering our hotel I walked across the adjacent intersection and bought a bag of pastries from a wizened old lady in a faded shift who was selling them from her street cart. She seemed delighted, smiling the whole time, happy to have made a sale. 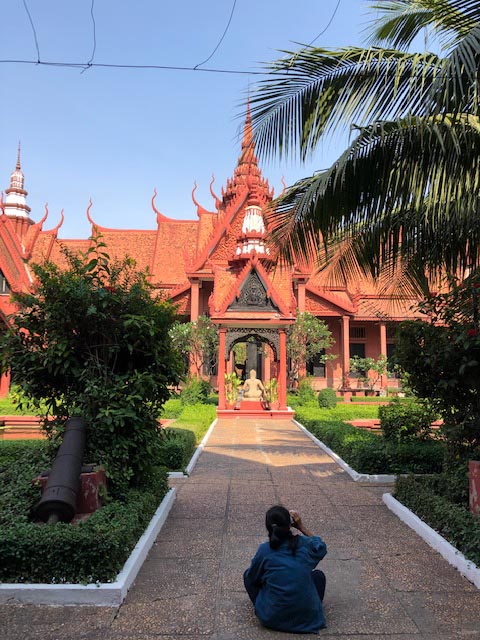 The next morning, the start of our only full day in Phnom Penh, we hired a tuk tuk to take us to Tuol Sleng prison, now called Tuol Sleng Museum. The prison had been established by the Khmer Rouge as soon as they took over Cambodia in April of 1975. To implement their vision of a radical communist society of agrarian purity, the Khmer Rouge acted quickly to eliminate any vestige of modern or Western influence. They began by driving virtually the whole population of Phnom Penh into the Cambodian countryside to build dikes and work the agricultural fields. Anyone exhibiting even a trace of urbanization, sophistication, or Westernization was typically either killed outright or driven to a rural labor camp to be executed or worked to death. During the Khmer Rouge’s four-year reign, more than 12,000 Cambodians were tortured and killed in Tuol Sleng. Throughout Cambodia, nearly two million were killed. The carnage finally ended when the Vietnamese army overthrew the Khmer Rouge in early 1979.

Tuol Sleng, code named S-21 by the Khmer Rouge, had been a high school before the Khmer Rouge turned it into a prison, and from the outside that’s pretty much what it looked like. It took up much of a city block but apart from its size it seemed about as unremarkable as the small shops and cafes around it.

Inside, though, it was a horror show. The gloomy cement rooms still contained the bedsprings where prisoners were bludgeoned to death. Black and white photos on the walls showed the battered corpses Vietnamese soldiers found in the rooms when they entered the prison. Other rooms showed photos of nearly every prisoner held in Tuol Sleng. Some looked resigned, some looked baffled, as if they were wondering what they were doing there. But for the Khmer Rouge, guiltlessness didn’t matter. As Comrade Duch, the notorious head of the prison’s operations said, “S-21 was the end of the line … People who got sent there were already corpses.”* 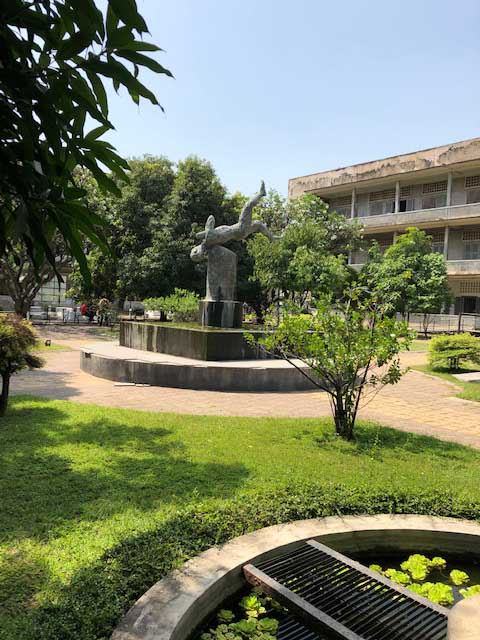 After a couple of hours, Mardena and I went back into the street, hired a tuk tuk, and rode back downtown. We walked to a few other sights—the city’s revered Wat Phnom Temple, the Central Market, the Royal Palace, and the National Museum. My favorite sight wasn’t really a “sight” at all. It was gaggle of school girls, three of them, probably in fifth or sixth grade, who passed us on a grungy little downtown street, heads together, giggling. It was a Friday afternoon, and they were on their way home from school, dressed in red and white school-required skirts and blouses. It reminded me of Friday afternoons when I was a kid, free at last, looking forward to the weekend.

The next morning, sitting in the back seat of an SUV on our way to the airport, I was thinking how much I liked the city and the people we’d crossed paths with. But as we passed block after block of nondescript office buildings. I realized I’d begun to feel vaguely apprehensive. My muscles had tensed and my mind was uneasy. It didn’t take long to figure out why. The dull office buildings reminded me of S-21. At one point, when we stopped for a red light, it actually crossed my mind that people might come out of one of those buildings and pull Mardena and me back inside. I knew it was irrational, but I couldn’t shake the unease. I was relieved when we got to the airport.

As a stranger passing through, I can’t know how people living in Phnom Penh feel about their city and country. I know the Khmer Rouge inflicted monstrous atrocities. I know the current government is authoritarian. And sitting in that SUV I realized that Tuol Sleng had leached itself into my bones more than I would have guessed. Still, nothing I saw suggested to me that Phnom Penh felt itself a city oppressed. It appeared to be active, moving forward, the people amiable and appreciative. Phnom Penh might well be better known for its sad recent history than for its appealing present-day ambiance, but what I’ll remember from our time there is not so much a city with a harrowing past as one that to all appearances is putting that past behind it. 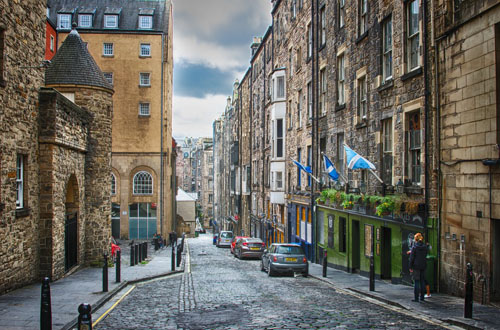 Tips for taking a last-minute staycation