A couple of years back, I mentioned to my doctor that my wife and I would be going to Laos in a few weeks. “Laos!!?” she said, surprised. What she meant, of course, was “What in the world for?” Well, in my case it was because the place intrigued me. For one thing, nobody I knew had ever been there. Thailand yes, Vietnam yes, but not Laos. For another, there was Luang Prabang, a place my guidebook called the “jewel” of Southeast Asia. And for another, there was Vientiane, Laos’ capital.

Actually, in the case of Vientiane it was mostly the name that attracted me. To me, there was hardly a city anywhere with a name as atmospheric. I imagined the place as an exotic blend of French and Laotian, lazing alongside the Mekong River, sultry, tree shaded, and peaceful.

My guidebook, probably for the better, put a bit of a dent in my fantasy. It said that although there were 200,000 people in Vientiane, there wasn’t a lot to do there. That put things in perspective. Since Mardena and I had never been to Southeast Asia and were going there mainly there to see the highlights, I decided I’d better limit our time in the city. I made reservations for two nights.

On a balmy morning in mid-February, the van from Vientiane’s Wattay airport dropped Mardena and me off at the Vayakorn Inn, a little hotel on a sleepy street not far from the center of town. The Vayakorn was a newish place with a big open lobby, marble pillars, and polished hardwood floors. It was a painless $35 a night ($24 nowadays) but several notches in quality above anywhere else we’d been staying.

We paid the van driver and kicked off our sandals and nudged them next to some others sitting outside the entrance. When we shouldered our packs and stepped into the lobby, we were greeted by something I’d never have expected to see: an overstuffed red and white golf bag, one of those heavyweight ones like big-time golfers use, full of shiny, immaculately maintained golf clubs. It couldn’t have looked more out of place, and although I didn’t realize it then, it anticipated, and even came to symbolize for me, our experience in a city where the unexpected became the norm.

My first thought was that the clubs must belong to a pro. But what were they doing in the lobby? More to the point, what were they doing in Laos? Was there even a golf course anywhere around? Vientiane wasn’t exactly known as a playground for the country club set. Sitting by itself in an empty lobby in the middle of Laos, the bag looked sort of forlorn.

Mardena and I headed on over to the front desk. The clerk handling check-ins was maybe thirty, short and thin, with a squarish face and prominent cheekbones, wavy black hair and thick black-rimmed glasses, dressed in dark slacks and a short sleeved white shirt. Like us, he was barefoot. After we checked in, we got to talking, although I’m not sure that’s what you’d call it. I had a terrible time understanding the guy’s English. I don’t mean to belittle him; I admire anyone who speaks a second language (I don’t, myself) especially one as vastly different as English must be from Laotian. 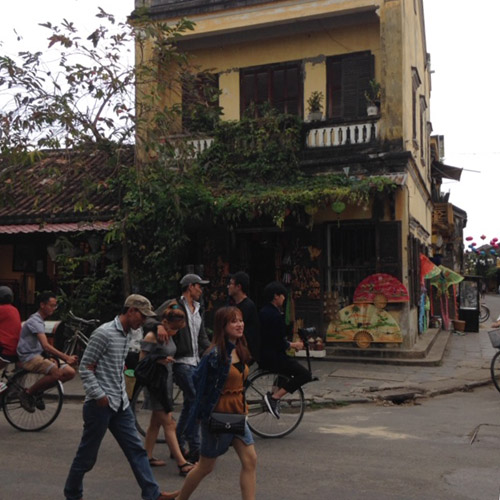 At one point the clerk asked us something I did understand: “You like Trump?” This was March of 2017, a few months after Donald Trump’s election to the U.S. presidency. I gestured thumbs down and Mardena and I grumbled, “noooo!”

It was like a button had been pushed. The guy launched into a nonstop monologue on Trump. He said Asian dictators—he named two or three–loved Trump. At least twice he repeated Trump’s campaign slogan, “Make America Great Again,” which sent him into peals of laughter. He said a lot more, too, but I couldn’t understand it. While he talked, he’d bounce up and down on his toes, barely able contain his excitement. It was like a spectacle, really. There was something fascinating about a guy so passionate about what he was saying that he was oblivious as to whether anyone understood him. Mardena, I noticed though, had been nodding in agreement the whole time. It looked like she understood.

After a few minutes Mardena and I tore ourselves away. As we were lugging our packs upstairs to our room I asked her what he’d been saying. “I don’t know,” she said.

We settled in for a bit, then headed back out to a grassy park that stretched along the Mekong River a few dusty blocks away. It was winter in Laos, but it was hot. The only other person there was a young mother pushing a baby carriage. Except for the grass, the park was barren and treeless. On the opposite bank of the river, over in Thailand, there was nothing but a few scrubby bushes. It was a little disappointing. We walked around awhile and then went back to the hotel. It was becoming clear that Vientiane might not be the leafy haven I’d imagined.

Later that afternoon, I went down to the lobby while Mardena napped. The golf clubs were still there. I sat on a red upholstered bench along one of the big plate glass windows with the Vientiane Times, a little English language newspaper, on my lap. In an empty lot next to the hotel, four or five young men and women were clearing out shrubs, trees, and weeds. They were laboring away in the heat with shovels, picks, and elbow grease, not a machine in sight. Just outside the window a wiry, shirtless young man in jeans paused and rested on his shovel now and then as he tried to wrestle the root ball of a six-foot tree out of the ground. The other workers were digging and raking in other parts of the lot. I was surprised. I knew the country wasn’t rich, but I hadn’t realized that machinery in Laos might be a luxury.

That evening, Mardena and I walked to a downtown street near our hotel to look for a couple restaurants my guidebook had recommended. There was no traffic, and from the looks of things there rarely was: a few yards ahead of us a big blonde dog lay flopped on his side in the middle of the dusty street asleep, his legs stretched out in front of him. We detoured around him. 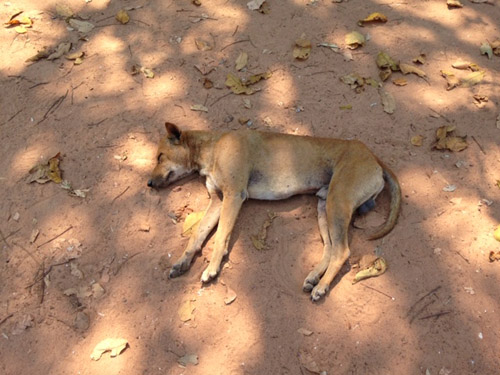 We found a restaurant, ate plates of noodles, and afterward stopped into a bookstore a few doors away. I bought a novel set in Laos, and on our way out, the proprietor ran up and handed me a big plastic map of Laos, compliments, probably, of the country’s tourist commission. I had to wonder, though, what the point was; so far I hadn’t seen anything resembling a tourist, unless you count the ghost golfer.

By the time we walked back to our hotel it was dark. The dog had disappeared but the golf clubs were still there, looking lonely as ever.

The next morning when we walked out through the lobby, the golf clubs were gone. We headed on over to the Lao National Museum, housed in a big old red brick building a few blocks from where we were staying. The sidewalk outside the museum was littered with papers and plastic cups, and the clumpy lawn in front of the building was equal parts grass and dirt. Several windows on the museum’s top floor were broken.

We paid the entrance fee to the man at the desk. As we made our way around, I saw two other customers, a couple, probably Scandinavian. To me, the museum’s best section contained military artifacts and black and white photos from the war between Laotian government forces and the insurgent Pathet Lao back in the 1960s and 70s, a war closely linked to America’s war across the border in Vietnam.

Best of all were the commentaries that accompanied the photos. My favorites were a couple that described the Laotian government forces as “stooges” of their American allies. You normally wouldn’t expect language like that alongside museum displays, but if anyone had a right to dispense with impartiality it was probably the Laotians. While the U.S. was at war in Vietnam it had dropped more bombs on Laos than it had dropped in all of World War II and had killed approximately 200,000 Laotians in the process. And, officially at least, The U.S. hadn’t even been at war with Laos. As unprofessional as commentaries like those might have been, they made the museum seem a lot less impersonal and a lot more fun than any I could remember visiting.

That afternoon back at our hotel I talked to our son Max on Mardena’s cell phone. As usual we eventually got around to sports, and he asked if I’d seen that a star player on Sacramento’s professional basketball team had been traded to New Orleans. No, I said, the NBA isn’t exactly big news in Laos. We chuckled. Later that afternoon, down in the lobby, I picked up the latest issue of the Vientiane Times, and sure enough, there on the second page was a story about the Sacramento player’s trade to New Orleans. I couldn’t wait to tell Max. It would be good for another laugh. 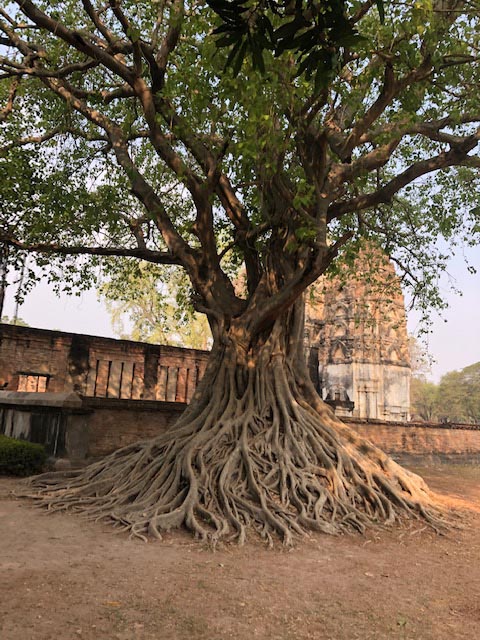 Visiting Vientiane made me modify—well, discard, actually—my preconceptions about the place. It was sultry and peaceful alright but it was a lot more about heat, dust, and making do with what you’ve got than about restful greenery and anything vaguely exotic. If I had to sum the city up in a word, though, the word would be quirky; if there was ever a place where the unexpected seemed to pop up at about every turn, Vientiane was it. In part, that might have been a matter of chance, but regardless, the city left Mardena and me with memories that are sure to stick with us. And if the Vientiane we experienced wasn’t quite the rose-tinted one I’d imagined, that was okay with me. Travel has a way of puncturing misconceptions. That’s what I expect it to do. 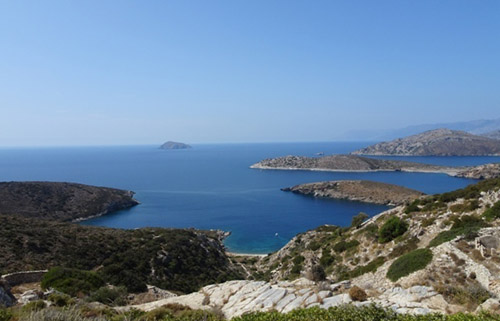 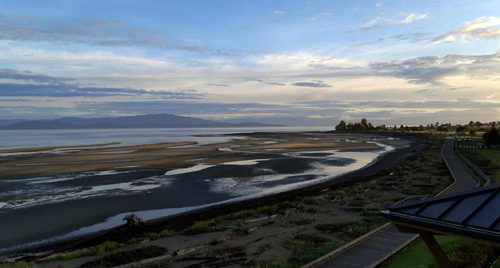 A mini-break in Parksville, British Columbia