All the other seats in the reserve were erected in memory of deceased nature lovers. This one was labelled ‘Old Gits Corner’, which I thought somewhat appropriate, so I sat down on it for a few minutes to watch the butterflies, a small white, a couple of red admirals and several speckled woods sunning themselves in the cleared patch on the opposite side of the boardwalk.

Half-an-hour earlier, I had followed the path from the visitor centre onto a circular loop through woodlands that had been allowed to grow unchecked to a jungle density. Many of the trees were multi-stemmed, having been periodically coppiced in centuries past. Acorns and leaf litter lay scattered randomly along the track, which was lined with water mint, forget-me-not, faded purple loosestrife and large fungi. Blackberries, rosehips and enormous haws decorated the surrounding shrubbery. 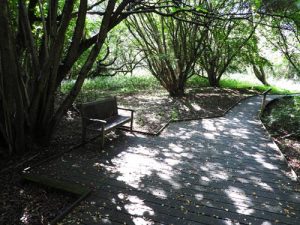 At the first feeding station, I watched chaffinches, greenfinches, blue, great and coal tits, a robin and a blackbird gorging on seeds, while a rat swept up much of what fell to the ground. A pair of juvenile bullfinches, a male and a female, joined the throng for a few seconds then vanished. Several of the small birds appeared to have recently fledged.

Sculthorpe Moor Nature Reserve, owned by the Hawk and Owl Trust, lies about two miles to the west of Fakenham, in Norfolk. It is much smaller and less well known than Pensthorpe Natural Park, equidistant to the east of the town. When I arrived, at around 11 am, on what was to be a very warm autumn day, there were fewer than half-a-dozen cars in the car park. Throughout the four very relaxing but fascinating and thoroughly enjoyable hours I spent there, I only occasionally met other visitors, and frequently had the feeling of having the whole place to myself. Nevertheless, it has its unique charms, and in its undemonstrative way has beauties that, in some cases, perhaps even surpass those of its neighbour.

Situated on the north bank of the River Wensum, Sculthorpe Moor was always a wet area of little use for agriculture. It did, however, during mediaeval times, provide peat for fuel, reeds for thatching and on drier patches, grazing for cattle. Deer were also hunted here. In the 19th century, much of the land was enclosed, but a 30-acre section in what is now part of the nature reserve was granted to a charitable trust to supply peat for the poor. Shooting of game birds and wildfowl continued until the 1970s, after which the moor fell into neglect, until it was leased to the Hawk and Owl Trust, who began to restore its habitats in 2001. 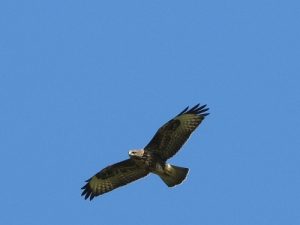 As its name implies, the Hawk and Owl Trust, founded in 1969, was set up to help conserve the much persecuted birds of prey and inform the public about them. On its two sites, Sculthorpe Moor and Shapwick Moor on the Somerset Levels, the Trust carries out research and education activities and manages habitats for the raptors to roost, nest and feed. It has also placed webcams on Norwich Cathedral and St John’s Church, Bath, to allow the public to observe the nesting peregrines.

On leaving the loop, the boardwalk turned sharply to the left and began a straight stretch through which woodland thinned and gave way to fen vegetation. Some of the channels that ran beneath the laths were dry, but in one, where the water crawled so slowly as to appear almost still, a sudden ‘plop’ and spreading ripples suggested the presence of a water vole or water shrew. Across a dyke, and not yet open to the public, a small flock of what I took to be Soay sheep grazed a patch of land recently acquired, which significantly increased the reserve’s area.

A further smaller loop brought me to Whitley hide, which commanded a view over an extensive area of fen. A long channel cut through the reeds to the side of which lay an upturned wooden boat. A solitary mallard dabbled in the channel while a Highland cow stood motionless at the water’s edge. Just in front of the hide, a greenfinch settled on a reed stump, then hopped down onto a half submerged twig from which it was able to reach the water for a drink. A pair of chaffinches squabbled on a feeder tray.

A short distance beyond the loop, an aerial walkway, gently angled to allow the progress of a wheelchair, ascended to Tower hide, which looked from its elevated position across reed beds among which grew a scattering of willows. The walkway itself passed through hawthorn, holly and rowan laden with berries, and a bramble clinging like a vine to the branches of an alder. Dragonflies darted back and forth and a scarce chaser settled on the handrail.

A further sharp turn to the left led along the north bank of the Wensum and came to an end at the Paul Johnson and Victor’s hides, which shared a view over a pool known as The Scrape. On entering Victor’s hide I heard the unmistakeable trill of a nearby water rail, though as is common, the secretive bird itself remained hidden in the reeds.

I spent perhaps half-an-hour in the silence of the hide, sharing its tranquillity with nobody else. There was little avian activity over the pool, but an abundance of colourful damselflies and some very large dragonflies. Then the birds for which the reserve was created made their appearances. A buzzard rose above the wet woodland that grew beyond the pool, followed by another. The pair circled over the trees for several minutes before dropping back into them. Then a marsh harrier appeared, gliding quietly over the reed bed, into which it suddenly dropped, perhaps having detected the presence of prey.

On the stroll back to the visitor centre, I paused to watch a wren, completely undeterred by my proximity, flitting about in some bushes no more than a couple of metres from where I stood. During my stay at Sculthorpe, the day had become much warmer.

A mini-break in Parksville, British Columbia