If you see a queue or a crowd in Singapore, I remind myself, follow it. Up ahead, near where the pedestrian paths of Albert Mall and Waterloo Street converge, a mostly Chinese Singaporean crowd gathers in front of a row of signboards. No pushing or shoving, but a respectable amount of neck-craning and shifting around to get a look. Cell phones pop up above the crowd, as sure a sign as any that whatever this is, it will be worthwhile.

It’s getting late in 2019. I haven’t been in Singapore a full year yet, so some sights still take a while to register. Cranking through the late-afternoon fuzz, my brain accesses its burgeoning database of items filed under “Singapore, Random,” trying to align the lens of what I know with the lens of what I see. As I make my way through pigeons and toward the crowd, the two lenses click into focus. I may exist in the secular plane of the Gregorian calendar, but the scene before me offers a reminder that Singapore is a land of many calendars, each marking the flow, shape and meaning of time in a plane of its own. I’m a one-hundred-percent-rational adult, but I feel delightfully off-balance as I realize I’m walking toward my destiny – the new horoscopes for the upcoming Year of the Rat.

No matter the country, I’m a head shorter than average, so I politely squeeze past fragrant armpits and sweaty shirts to reach the front of the crowd for a look. Living here may elevate me above tourist status, but I’m wary of making the wrong move that could quickly turn that into a distinction without a difference. Cautiously, I put thank you and pardon me on a continuous loop until I can see the twelve horoscopes, one for each animal in the Chinese Zodiac. I gaze down the row until I find the horoscope unspooling how the Year of the Rat will go for those, like me, born in the Year of the Dragon. Deep breath in, and I get down to reading.

Lucky number: 8787. Okay. This is starting out okay. Eight is a hugely auspicious number to the Chinese because it sounds like the Chinese word for wealth. Seven might be more of a mixed bag, Hungry Ghost Month being the seventh month of the Chinese calendar, but the two eights apparently more than pull their weight.

Moving on to the words. Unfavorable stars. Worse than expected. Dangers. It doesn’t take much to realize that this horoscope may – no, will — go down as one of the absolute worst, most horrendous, get-under-your-bed-and-don’t-come-out horoscopes in horoscope history. Seriously, these are the highlights:

[T]here are many unfavourable stars plaguing you…your luck will always be worse-than-expected. If you are not careful, there are dangers of financial losses and lawsuits as well as injuries… Do not splurge on travels and luxury items as there will be unforeseen events unfolding…Your career will be met with obstacles…Your unstable emotions will result in poor productivity…Foul moods will lead to an unstable marriage while children may give you causes for headache….

Stunned, I slink back as the crowd closes in my wake. The Year of the Rat looms, like a rodent-filled canyon that I’m about to cross blindfolded on a tightrope. 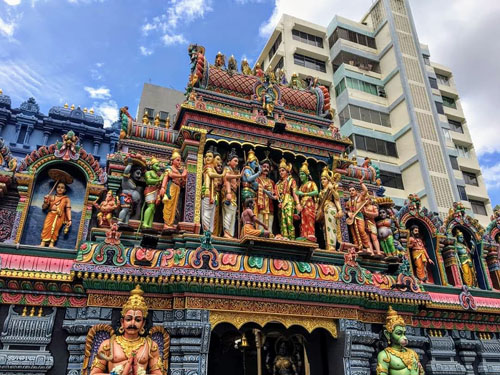 Over the coming days, as 2019 wanes, 2020 waxes and the late-January start to the Year of the Rat approaches, I’ll return several times in case complaints have yielded a better outcome (they won’t) or if the words have magically rearranged themselves (they don’t). I’ll stop at every posted horoscope I pass (there will be many), searching for inconsistencies, hoping to find enough good ones to yield a tolerable average. I succeed somewhat but, like a bad grade on a midterm, this first horoscope will not be overcome.

But here, today, I’m awed by the sheer audacity that led someone knowingly and willfully to post this horoscopic horror. Then I spot the fine print – the horoscope is sponsored by one of the many stores in the area selling religious items, including amulets to ward off evil. I’m simultaneously struck by dismay, an endorphin rush and a thought: I love this place!

Despite appreciating the orderly functionality of everyday Singapore, I crave the utterly disorderly, busy, transactional patch of pedestrian mayhem where Waterloo Street meets Albert Mall. More than just the intersection of streets, it’s the intersection between yes and no, commerce and religion, ridiculous and profound. If this space were a Venn diagram, it would be labeled “possibility.”

At the heart of it all are two temples – Hindu Sri Krishnan and Buddhist Kwan Im Thong Hood Cho. Singapore markets Waterloo Street as one of its “streets of religious harmony.” But to whom do I write to tell them they’ve got it wrong? Sure, if you add in the Orthodox Jewish temple down the street and the mosque and church around the corner, you’ve got amazing diversity in a small area. True, the Buddhists who pray at Kwan Im Thong Hood Cho stop again to say a prayer in front of Sri Krishnan. (More prayer, more fortune.) Yes, in the narrow sense of peaceful coexistence, it’s wonderfully harmonious. But the dominant vibe on this stretch of Waterloo Street isn’t harmony. It’s jazz.

The reedy, squealing sounds of the nadaswaram, the oboe’s Indian cousin, pour out from the inner recesses of Sri Krishnan. Brightly-colored statues line the temple inside and out, including manifestations of the ten incarnations of Vishnu, a wedding and winged Garuda. Even after repeated visits, I notice something new each time. I honestly believe that the statues of Sri Krishnan come to life each evening and switch places under cover of darkness just to keep me on my toes.

On the plaza between the temples, calls of “buy a flower?” supply the vocals amidst a jumble of red and yellow umbrellas and tents that mark the symbiotic commercial domain. Some shelter the stalls of vendors selling pink lotus blossoms, yellow chrysanthemums, oranges and joss sticks. Others protect the al fresco offices of fortune tellers and feng shui experts eager to consult on everything from finance to romance. All the while, devotees light their joss sticks and stop outside Kwan Im Thong Hood Cho to bow and pray. Before entering, they leave their joss sticks burning in the urn outside the entrance, the smoke and ash of their prayers mingling with the smoke and ash of those who came before them.

Step inside Kwan Im Thong Hood Cho and you’ll know how it feels to stick your head inside a snare drum, as the red walls of the main hall vibrate with the sound of devotees shaking divination sticks in tin cans. They’re on their knees, praying to Guan Yin, the Goddess of Mercy, over a personal question. Buy the house? Ask the girl? Ace the exam? The devotees rattle on in an endless percussion riff until one of a hundred numbered bamboo sticks jumps out of the can. A hundred sticks. A hundred answers. Infinite interpretations. The fortune tellers waiting outside are more than happy to help. I later learn that there’s also an app for that.

In the surrounding buildings, stores sell religious items, such as amulets or metal bins for burning joss paper at home. The more ambitious enterprises double as religious arcades bursting with gleaming golden shrines that accept cash donations before or after a quick prayer. Around the corner, lucky number vending machines distil the transactional atmosphere down to its rarefied essence. Put your money in the slot and a doll-sized god delivers a four-digit number you can take to the Singapore Pools betting counter down the street. When your number pays off, don’t forget to slip a little something in the “Wealth Donation” slot on your way home.

Everyone comes to the intersection of Waterloo Street and Albert Mall with a motive – to answer a question of their own or to help someone else find an answer. To say a quick prayer. Perhaps two. To get their lucky numbers. To find Fu (fortune), Lu (prosperity) and Shou (longevity).

Within the next several months, as the Year of the Rat progresses, it will become painfully apparent to me that my horoscope was legitimate. That the entire world was born in the Year of the Dragon. We’ll all spend the year crossing a rodent-filled canyon on a tightrope while blindfolded. And we’ll all find ourselves at the intersection of the ridiculous and the profound.

Postscript: As the Year of the Rat nears its end, the Singapore Land Authority has announced that Waterloo Street’s vendors and fortune tellers will be assigned to designated spaces and furnished new umbrellas, thereby creating a “safer and more pleasant street experience.” This is like asking your favorite crazy aunt to behave at your wedding. She’ll do it and, yes, it will make your wedding “more pleasant.” But you’ll realize later it made you both a little sad and your wedding a bit less interesting. Guests who had not previously met your aunt will never know what they missed.

Much more by this author on her very excellent web site, Rambling Llama. 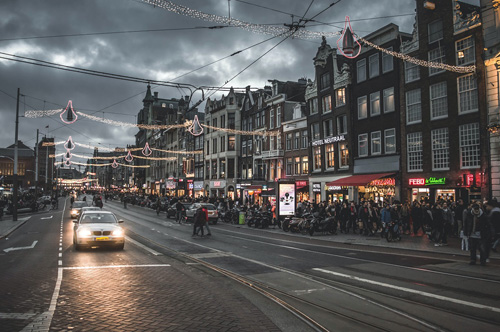 From London to The Netherlands