Though we were only a fifteen-minute ferry ride from the mainland, we felt that we were in a different country. We passed through sparsely populated farmland on an unsurfaced road. We had driven forty kilometres south of Hobart, Tasmania’s capital, to meet the ferry at Kettering, that was to take us to Roberts Point on North Bruny Island. The timetable seemed somewhat erratic, with its departure dependent upon when the boat filled rather that a strict schedule, which saw us running on board some twenty minutes before the supposed sailing time, carrying the coffees we had just bought in the terminal restaurant. 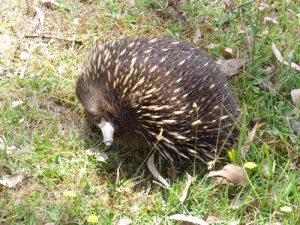 Within minutes of our landing, we spotted our first wild creature, an echidna, burrowing into the sandy roadside. This seemed appropriate, for it was on Bruny Island that European explorers first encountered this strange monotreme to add to the list of bizarre creatures they had come across elsewhere in Australia.

Bruny Island is about 100 kilometres long by 16 wide at its widest, though it is divided into North and South islands by The Neck, an isthmus little more than 100 metres wide. It takes its name, as does the channel that separates it from the mainland, from French sailor, Bruni d’Entrecasteaux, who circumnavigated and mapped it in 1792. Its Aboriginal name, Lunawanna-allonah, is preserved in the names of two of the settlements on South Bruny. 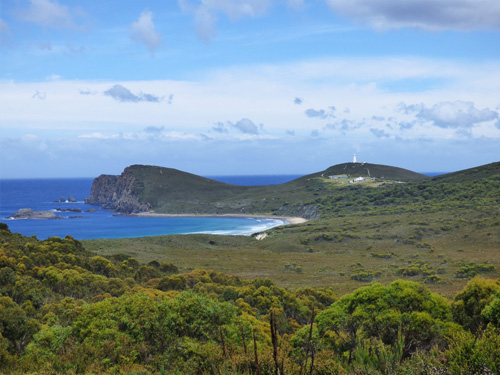 With a resident human population of 600, it is a haven for wildlife and internationally important for its birds. Among the 150 species recorded on the island are all twelve of Tasmania’s endemics, and it has the largest gathering of the endangered 60-spotted pardalote.

We drove to Dennes Point, at the island’s northern end, and for a short time shared the otherwise deserted beach with a pair of chestnut teals and a sooty oystercatcher. The latter, despite its name, though in common with its namesakes elsewhere, showed no interest in the oysters that crusted the rocks. Along a sandy stretch, an adult Pacific gull, the largest of Australia’s gulls, tried to ignore the pestering of its chick. A whistling kite flew south across a nearby field. 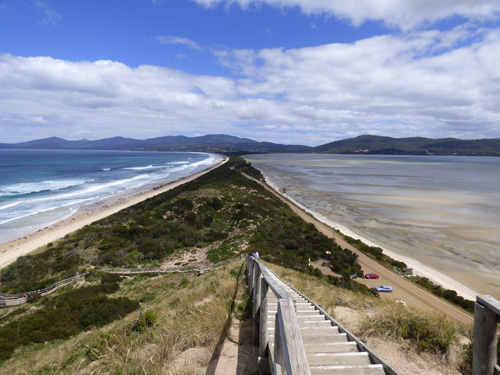 We drove south along one of the few stretches of surfaced road to The Neck, where we climbed the steps to the top of Truganini’s Lookout. A small pillar on the summit commemorated the lady who was thought to have been the last full-blooded Tasmanian Aboriginal, though recent research has revealed others who probably outlived her. Truganini died in 1876, aged 64, after a troubled life that witnessed the brutal treatment the native people suffered at the hands of the European settlers.

The view from the lookout was quite amazing. South Bruny spread across most of the southern horizon, while to the west lay Isthmus Bay, with Adventure Bay to the east. The latter was named by Tobias Furneaux in 1773 after his ship, which became separated from Captain James Cook’s vessel during the latter’s second voyage to the South Seas. It became known as a safe anchorage for ships, while the island itself provided game and fresh water. In 1788, HMS Bounty, under William Bligh stocked up there before sailing on to Tahiti and the most famous mutiny in naval history. Despite the bay’s safe reputation, between 1909 and 1935, no fewer than seven ships were wrecked here, most of them carrying timber harvested from the island’s forests. 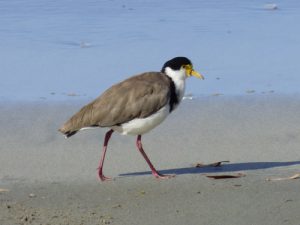 The sand dunes that make up The Neck are honeycombed with the burrows of fairy penguins and short-tailed shearwaters. The former, the world’s smallest penguins are found at many sites along Australia’s south coast, including in the city of Melbourne. They are rarely seen during daylight hours, when they are fishing for squid, small fish and krill far from land, returning to their burrows at dusk. While many spend the winter months at sea, a small number remain in their colonies throughout the year. 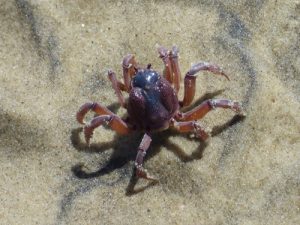 The shearwaters, in contrast, are long-distance travellers. They also are unlikely to be seen during the day, and are more likely to be heard returning to the colony in the darkness. They are the most abundant sea birds nesting in Australian waters.

We carried on to the Captain Cook Caravan Park at the southern end of Adventure Bay, where we were to spend the night. A Tasmanian hen, one of the island’s endemic birds, together with its chick pecked in the grass outside our cabin. A yellow-tailed black cockatoo, the only species of black cockatoo in Tasmania, perched in the branches of a nearby tree.

The following morning, we strolled along the beach from the place where Captain Cook made his last landfall in Australia. A track led us into South Bruny National Park, through tall eucalyptus and she-oaks and out onto a rocky beach around which hopped several wallabies. Ruined buildings were all that remained of a whaling station that thrived here during the early part of the 19th century. The man credited with founding the industry was James Kelly (1791-1859), the son of immigrants, a ship’s cook and an Irish convict. The main quarry was the southern right whale, 41 of which were landed here in 1829 alone. Needless to say, the industry crashed, along with the whale population, by the mid-19th century. Though the numbers of southern right whales are now increasing, it remains an endangered species, with an estimated 3000 at present worldwide. 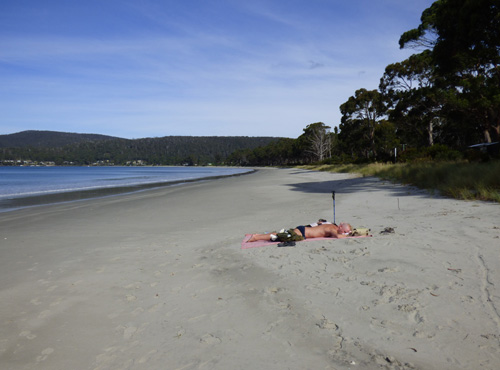 In the afternoon, we drove through the forest to the west of Adventure Bay. The distance seemed much farther than its five kilometres, for the surface was deeply pitted and channelled while the tall trees and dense shrubbery created an almost primordial atmosphere. We might not have been surprised had a dinosaur come crashing through the undergrowth.

The road to the south-west peninsula, though still unsurfaced, was an improvement, and brought us to a car park from which a paved footpath led us up the short ascent to the Cape Bruny lighthouse, through low shrubs consisting largely of banksias and common heath around which hopped colourful honeyeaters. 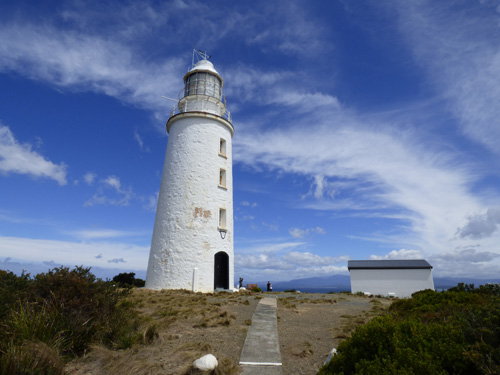 The lighthouse is the second oldest in Australia, and though it is no longer used, was manned continuously from 1838 until 1996. It was built, like much in Tasmania, by convict labour, using the local dolerite rock, the distinctive columnar structure of which can be seen in the surrounding sea cliffs.

Before heading back to our ferry, we relaxed for a final couple of hours on Adventure Bay beach, accompanied only by some tiny, but very colourful soldier crabs and a solitary masked lapwing that paddled along the edge of the tide. And before we left, this beautiful, wild island tossed us a farewell free gift in the shape of a wedge-tailed eagle gliding slowly over the beach.

Much more by this author on his very excellent website. 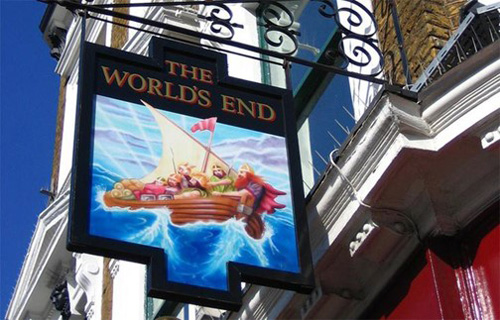 Camden High Street: No One Rushes in Camden