On Rangiroa’s main island Avatoru, there is a black pearl farm. I had seen Gauguin’s Pearls marked on a map while I was still in Tahiti, but since I stayed on the next-door island of Tiputa, I only got around to visiting the pearl farm at the tail end of my week in Rangiroa.

In the open Polynesian fashion, the pearl farm at Gauguin’s Pearls can be visited. In the off season, they’re less likely to run organised tours. Either way, visiting the farm is free, and though you’d visit the adjacent shop afterwards, there’s no obligation to buy. 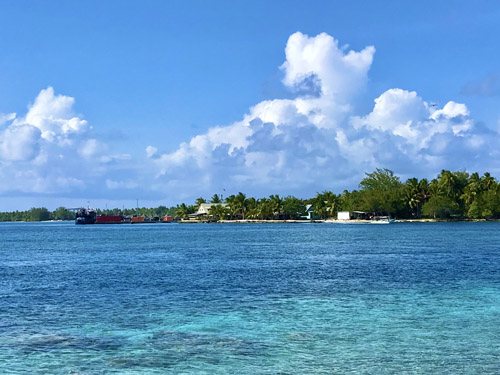 My host, herself once a pearl farmer in her family’s farm during the heyday of French Polynesia’s black pearl industry, took me there by boat. As the boat came alongside the mooring, we passed over long, rectangular cage columns lying on the seafloor. The exceptional clarity of Rangiroa’s lagoon allowed me to see the rough shells of oysters within.

Once the boat was tied securely, we alighted and walked past a series of concrete tanks where baskets of oysters were submerged in the running water. Under a palm-thatched roof was the tour waiting area. My companion left me there to browse the pearl farm relics on my own; moments later she returned to tell me we could go to the worker’s shed.

The Tahitian ‘black pearl’ is not actually black. It actually comes in any of a range of chromatic colours, although it is most commonly dark blue or green (or both). They grow as normal pearls do, within black lip oysters that produce pearls of iridescent colour instead of the typical pearly white. In the numerous shops across the Leeward Isles, it seemed I saw them all: deep blues and emerald greens, the pinks and orange of sunsets, gold and silver-blue, pewter-grey and steel.

Grown to maturity in the sea along ropes in cages, they are then seeded with a mother-of-pearl nucleus that will be coated with nacre in time, hopefully forming a perfect round pearl. My host explained that the oysters are bred to encourage rounder pearls, and particular colours.

A man was in the shed, wedging open a basket of oysters with the speed of experience. Island music played on speaker from his phone propped against a wooden drawer on a work table. He left the wedged oysters to relax and returned to the table.

A tray of slender metal tools lay against the backboard, arranged neatly next to a pair of sharp metal scissors and a metal clamp that was screwed in place. A small wooden block was stained red on one end. Long strips of oyster tissue lay upon the block in parallel lines. As he worked cutting the strips into smaller slices, I thought he seemed like a surgeon. 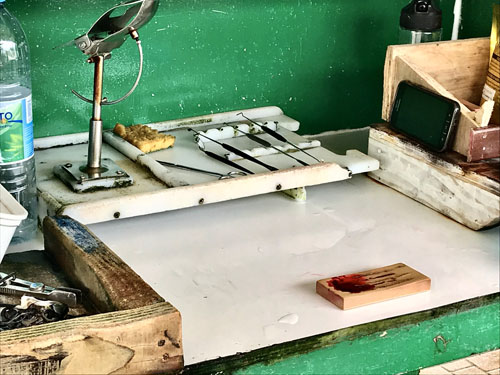 When he began the pearl seeding, I saw why the oysters had to be pried open beforehand. It made the next part faster.

An oyster was held in the clamp. With quick, dextrous movements, a pearl nucleus was placed in, a slice of oyster tissue from the block followed after, then the wedge was removed, and the oyster snapped shut. It took less than half a minute.

As for the red stain? My host pointed to a bag with a resealable top. It was a kind of culture solution, meant to help the donor oyster tissue induce pearl formation.

Afterwards, the oysters were placed in the tanks to recover, and then back into the sea, left to make their pearls in the coming years.

Selecting black pearls for your own

The adjoining shop had a good selection of loose pearls, which they could fashion into simple jewellery on the spot. The philosophy is that you’d buy the pearl as an organic gem, and the setting is secondary.

In keeping with this, the pearls in the shop are graded similarly to gemstones, with A being the highest quality. Pearls are graded based on roundness and absence of blemishes, and larger pearls – taking longer to grow – are more expensive than small ones. 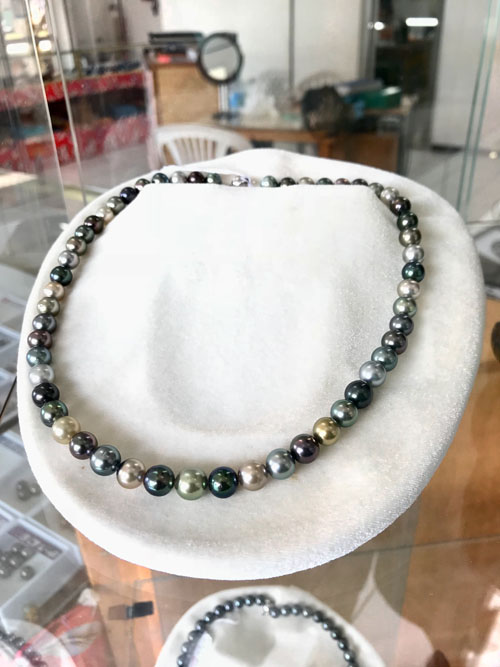 This means different things depending on what you want a pearl for. If you’re expecting it to double as an investment, then the best graded pearls would be the best, especially as in stores like these you would get a certificate to vouch for the pearl quality.

However, if you’re solely looking for personal jewellery, then none of that matters, and the perfect pearl for you might not cost much at all. For example, you could take a B grade pearl with blemishes only on one side, which isn’t visible as a pendant. This is far cheaper, even if the B grade pearl is more lustrous.

And if you’re up for pearl hunting while you’re roaming the islands, you could stumble on something special. My favourite find is actually a ‘flawed’ pearl. It was a smooth, symmetrical little metallic blue thing with a little nub which made it look like a teardrop or a spinning top. It wouldn’t have made a grade at all – but it’s perfect.