The blue screen of death. The spinning pinwheel of loading. The ferris wheel of please wait. Whatever the human brain equivalent of it is, it was happening in mine.

“Why don’t Muslim people educate girls?” my Tongan island tour guide asked again. It sounded like it was a serious question, however incongruous that was. Yet… I’m female and Muslim, which was presumably why he asked me the question in the first place. And I’ve told him that I’m a corporate environmental scientist with a Master’s degree. The question simply did not compute.

So I repeated these facts, and helpfully added that I was in no way an anomaly in my Muslim-majority country. I’ve colleagues who are female and Muslim, and I’ve close friends who are various things while female and Muslim, such as head of a major hospital’s infectious diseases department, an oncologist and a cardiologist, and a university lecturer in medical robotics. Nor was it an anomaly of my generation either, for my mother’s generation are lawyers and high court judges, national bank governors and founders of medical aid organisations, while female and Muslim.

I suppose if I were asked today, I could even have mentioned the UAE’s female and Muslim and Arab Minister for Advanced Sciences, whose Mars mission team was roughly gender equal.

But I doubt it would have mattered. The old man did not seem to realise my point that one couldn’t be these things without having been educated. Or perhaps it’s just cognitive dissonance. For the person telling him these facts was Southeast Asian, a race he wasn’t familiar with. Whereas the people who told him that Muslims don’t educate girls were Australian, a nation he deeply admired as representing all that was civilised and modern.

But I was on the tour in the first place, because I wanted to learn about his permaculture farm. So I summoned all my native Southeast Asian diplomacy and respect for the elderly (not that I was ever generously blessed with either), to focus on the bigger goal of the day.

Mind you, I’m not what people call a ‘visibly Muslim’ woman. I don’t wear a headscarf, and while I otherwise abide by modest dress, you probably didn’t notice that I am. But I do mention my religion on my Airbnb profile, so that I don’t accidentally get hosted by someone who has a problem with that. As it turned out, I was hosted by the only Baha’is on overwhelmingly Christian Vava’u, who had lived much of their lives in New Zealand and Australia.

In hindsight, my offence was probably amplified by having been profiled for gunshot residue screening at Sydney airport on the way to Tonga, just a few days prior. It didn’t have a routine vibe; the border officers looked daggers at me.

It wasn’t the first time it had happened to me. It just tends to happen more often when I’m travelling while dressed like a backpacker – you know what I mean. I’ve been profiled in Houston and Bali (in all fairness, in Houston it was probably because I looked Hispanic). But Sydney was different, as the border officers flagged me *after* seeing my passport, where my religion is stated, rather than by my ‘seasoned traveler’ appearance.

I told all this to my friend Mun, when I visited her in Sydney on my return layover. A Malaysian expat in Australia (or should I have used ‘immigrant’?), she could not fathom why I insisted on travelling while dressed like a backpacker. “You know already that you will get profiled. Why not dress rich?” Her Asian aversion for conflict was further strengthened by her knowledge of my actual status in Malaysia’s hierarchy, if I ever bothered to claim it. It was not like I didn’t know how to get treated better.

(Oh, and this, by the way, is why Asians are nuts about posh fashion brands. A Westerner can travel in faded shorts and flip flops and still be assumed to have money, but an Asian has to look like it.)

“But that’s the point, Mun. If I don’t, how will I know what people go through, who look like us, but don’t look rich?” She wasn’t convinced that it was at all my responsibility to know it firsthand.

I didn’t tell her of yet another incident I witnessed, this time in Melbourne International Airport, when a newly-arrived Chinese girl was yelled at by a cafe owner just because she turned around to her friend to ask a question in their mutual (Chinese) language. “When you’re in this country, you speak English!!”

After recovering herself, she made their orders, in English. In perfect, Australian-accented English.

I figured that if such incidents were prevalent, as someone of Chinese ethnicity Mun would be well aware already. And if not, then it was best not to tell her the anecdote needlessly. After all, during the same visit Darling Harbour was hosting a dragon boat race to mark Chinese New Year, and Year of the Pig decorations were up in the downtown area. A much better thing to focus on, I thought.

Anyway, the point is, my personal travel experience is that classism or racism has been more common than Islamophobia. Probably because while it’s not easy to tell I’m Muslim, I pass for every brown race so I get the combined effect depending on how I dress. Tonga was my first direct Islamophobia experience, when the biases were spoken to my face. And even then, it was really only a parroting of someone else’s genuine Islamophobia rather than a personally held bias. After all, my guide had never met a Muslim person before.

I’m not trying to be inconvenient, mind you. I’ve no interest in being ‘edgy and rebellious’ as an identity. I just turn out to be… inconvenient, if you’re wrong about stuff.

“Why do Muslim men always walk in front of their women?” My guide asked another bizarre question, just when I’ve about cooled down to listen to the permaculture. Always? If I had doubts before, I knew then that he learned this stuff in Australia, because Australians are weirdly obsessed with this question. Sigh. 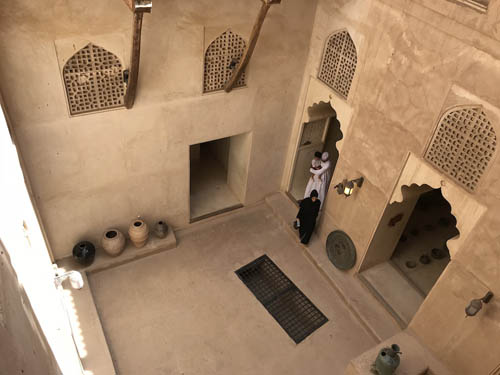 What is it with Australians and thinking that Southeast Asians are a resource for explaining subcultures of some other continent? I’ve been asked to explain ‘Middle Eastern violence’, even though large parts are not at all violent. I’ve been asked to explain walking order, as if there were a universal consensus that the front is better than the back, or that the premise of the question is even true. (It’s not, at least in Oman, where it is perfectly normal to see an Arab man carrying the baby while his wife leads the way. I have kept the photo evidence in anticipation of future interrogation in Oceania.)

Now, most people automatically respond as if the question was reasonable, and attempt to answer it. But, inconveniently, I might be on the ASD spectrum. I’m insensitive to peer pressure, allowing me to question the sanity of the question, when it would simply be too rude for others.

For a moment I was tempted to pull out a map and explain that these are different regions with different ethnicities, the vast majority of their histories completely separate, nor are the language roots related, different literature, parables and symbolism, different ecosystems, political systems… literally the only thing that is the same is religion. It would be like asking a Tongan to explain Poland, just because both are Christian.

But I desisted. For I would be a foreigner, trying to tell him that what he was told by a culture he admires isn’t true.

I knew that I was a ‘foreigner’ despite the fact that we look the same, and that our races were kin in the long-ago past. By then, I had the sense that Tonga considers Polynesia plus Australia as ‘self’, and everyone else as ‘other’. And you see, the border officers in Sydney with their rudeness and the cafe owner in Melbourne, they were not white. They were migrants themselves, South Asian and Arab.

That’s how you know what biases are in a country that you’re not told – it will be in what the new immigrants oversell, in their desperation to prove they belong.

Eventually, he told me of his grief over rising domestic violence in Tonga, where a law prohibiting child beating was only passed the previous year. In his mind, his way of consulting with his late wife, allowing her autonomy to make decisions in Tonga while he was away working in the west, is uncommon – except in the western world. And he was told that Muslims – apparently a monolithic bloc with no geo-cultural variations – have no such domestic norms at all.

This is a norm for the Muslim traveller, after 9/11. That you often have to wade through other countries’ geopolitics just to get around to talking about farming.

Yet how could I blame the biases of an old man, from a nation that had never been colonised by Europeans, who lived in a different time and who had never left the Pacific? To my guide, who had lived much of his youth in the Australian outback and New Zealand, the most modern cities in the world are in Australia.

And how could I blame Southeast Asia, for being too busy with other priorities as newly-independent nations, to revive ancient ties with Polynesia and be equally known? So I was just a foreigner, and not a friend.

No, there was no benefit to debate his borrowed question, or to answer it. For there was no hate in his heart yet, only an unchallenged faith in the truthfulness of his influences. And I was careful not to be the one who put it there out of anger.

So instead, I encouraged his world travel plans, advising him to expand it and take in such cities as Tokyo, Hong Kong, and Dubai as well. For the ‘world’ is a much bigger place than just the Western nations.

A month later, when Christchurch’s mosques grieved the mass shootings by an Australian white supremacist, I wondered whether it was the Australian media coverage that told the news Tonga, or New Zealand’s. I’d like to think it was New Zealand’s, whose leader made the only correct response in the history of modern-day domestic terrorism of publicly commemorating the dead by name, and shunning the shooter.

To this day I don’t know his name, and I’m glad New Zealand’s position is that nobody in the truly civilised world wants to know.

Running round Britain: the Southwest, Paignton to Dartmouth