After staying with Faye, I ran to Tintagel, home to the famous Tintagel Castle and all the legends surrounding King Arthur. From there, my next stop was Bude, 19 miles away. This stretch included Scrade, one of the deepest and steepest valleys on the Cornish coast.

After a few calmer days, Storm Gertrude had hit and the winds were picking up again. It had been a headwind for most of the morning, which meant that I was okay while I climbed up the hills, with the lump of land in front shielding me. But when I reached the top, I’d immediately be buffed in the face and suddenly struggling to stand upright. The force of it literally knocked me to the ground a couple of times and both times I landed in a thorn bush. I made a video in which I was on the verge of tears, rambling about the splinters in my hands and how hard it all felt.

The conditions were terrible and I felt bone-tired. Even though I’d scrambled my way into and out of lots of steep, deep valleys so far and I knew this one couldn’t be that much worse, the thought of tackling Scrade was looming. I didn’t think I could make it the whole way. I knew that if I made it to Crackington Haven, around 11 miles in, there was then a bus I could take into Bude where I was staying with local runners Annie and Graham for the night. I just had to get that far, I kept telling myself. A few more miles and I could stop.

By the time I got to Crackington Haven, I was exhausted, mentally and physically. The sheer effort of battling the wind and the mud, the fear of being blown off a cliff at any time… you couldn’t just switch off and let your legs go. It was relentless. I bought a can of Coke and a slice of cake in the tiny village cafe. I needed sugar. I was shaking.

I wanted to get on that bus so badly. I wanted to be somewhere safe and warm and dry. I didn’t want to be out on the exposed cliffs any more.

But more than that, I didn’t want to quit. On other days I’d bailed early, but it had been fine to retrace my steps and make up the lost ground the next day. It wouldn’t be that easy on this section. I was about to cross the border onto a remote section of the North Devon coast. I still wasn’t camping (and thank god, I thought, not fancying the chances of my tiny tent against those gusts), and it had been hard to find places to stay that were en route. Losing a day would throw my whole schedule off. And it would be a false economy anyway – I’d still have to do it tomorrow, when the weather wasn’t looking any better.

The realisation came with a certain amount of horror: not quitting meant carrying on.

I sat in the cafe watching the clock. I saw it approach the time the bus was due, then the minute hand ticked over. I didn’t move. I pictured the bus pulling away out of the village, without me on it. There were no more buses coming that day. I’d just have to get on with it. I drained the last of my Coke, sucking up any remaining droplets of energy, and reluctantly headed outside.

I put my headphones in and pressed play on my motivational noughties pop playlist, but I couldn’t hear a thing over the screaming winds.

These were the days that made us stronger, I tried to tell myself.

Several hours and some very slow miles later, I reached Widemouth Bay, home to a cluster of holiday homes, a pub and a cafe that sits about 3 miles south of Bude itself. The worst was over: I had survived Scrade and I knew that it was easy from there, just a grass path over the clifftops. But it was getting dark and I didn’t have any nerve left. I didn’t have it in me to set out in the dark along the cliff edge by myself.

Maybe I could just catch a bus from here, I thought. It was only a few extra miles to add onto the next day, no big deal.

The setting sun was really just a conveniently valid reason to cry “safety” and stop. The truth of it is that I just didn’t have anything else left in me. I’d been empty 15 miles earlier. I was really bloody empty now. But my phone had done its thing where it died in the cold again though and I couldn’t see any bus stops to check a timetable.

Ahead of me, I saw some lights just down the road glowing in the darkness. A beacon of hope – or at least that’s how I see it now, in retrospect. As I got nearer, I saw that it was the Wet Fish Shop. I’d never been to a wet fish shop before. I’d never even heard of one. The smell that hit me when I opened the door made it clear that this was a shop that sold fresh (“wet”) fish, as opposed to the cooked variety. There was a man working behind the counter.

“Hello, are there any buses going to Bude?” I asked him.

“Yes,” he said, “but you’ve just missed it and the next one isn’t for two hours.”

The thought of standing outside in the rain for 2 hours was almost worse than the idea of running there. Almost, but not quite.

“Is there a footpath along the main road?” I asked. Maybe I could just about force myself to walk a couple of miles on a road, I thought. Maybe.

I’d had enough hairy experiences on tight, fast roads already that I knew I wouldn’t be risking this one in the dark. That about-to-cry feeling surfaced in my throat. I needed to get to Bude but all the options to do so seemed terrible. I was frozen, my teeth wouldn’t stop chattering and a dark cloud had descended in my brain. The world suddenly felt like a very lonely place. I wandered across the shop and pretended to browse some non-wet-fish-filled shelves while I figured out what to do. Then –

“If you wait ten minutes,” the man said, “I can drive you down.”

It kept happening, but I was still so surprised every time anybody offered to help me like this. A few months earlier, I would have said no. Whether out of pride or politeness, I’m not sure. I would have said no and carried on standing there panicking about what I was going to do instead. But I kept trying to remind myself of my earlier realisation that people didn’t generally offer to do something unless they really didn’t mind doing it, so instead I said “Yes please” and stood by the wet fish waiting for him to finish. It was a bit smelly inside but it also wasn’t raining, so that seemed like a fair trade-off.

We got into his van and he asked me about what I was doing. It was a fair question, I suppose. January isn’t exactly prime time for tourists and I’d turned up in his shop just as it was getting dark, covered in mud and sweat, on the verge of tears. I told him that I’d run from Tintagel that morning, that it’d been a long day and that I was tired. I left out the hundreds of miles before that. I couldn’t summon the energy to pretend to be excited about adventuring. Right now, I was just happy with small talk.

I expected him to just drop me in the centre of Bude, but he insisted on taking me right to Annie and Graham’s front door. I said thank you and goodbye and that I hoped he had a nice evening, and that was that. The Wet Fish Man, my saviour, was gone.

Graham answered the door. He told me that Annie had been worried and headed out along the cliff to make sure I was okay in the dark.

“I’ll just give her a call and tell her you’re here, she’ll be back soon.”

I was a total stranger, I couldn’t believe they cared enough to have worried like that.

Graham looked me up and down. I’d been submerged knee-deep in mud for most of the day, with Storm Gertrude whipping the ground up from underneath my feet and plastering the rest of me with it too.

“Erm, there’s a hose around the back, would you mind…” he asked, and directed me through the side gate into the garden. When I saw how clean and light Annie and Graham’s home was, I was grateful to have had the opportunity to get the worst of the mud off before going inside. It’s generally not great house guest etiquette to turn all pale surfaces a shade of brown.

When Annie arrived home she said maybe the best words I have ever heard spoken aloud: “We have a hot tub, if you fancy a soak.”

I very much fancied a soak. I took a quick shower so as to not completely contaminate the water and then, less than an hour after my panic in the Wet Fish Shop, I was in a hot tub with a gin and tonic in my hand. How quickly things turn around.

Later, Annie cooked dinner and we talked about running and how great Cornwall is and other trips we’d been on. The dark cloud lifted a little, the tension in my shoulders that I hadn’t even realised was there started to release. The world felt a lot less lonely. 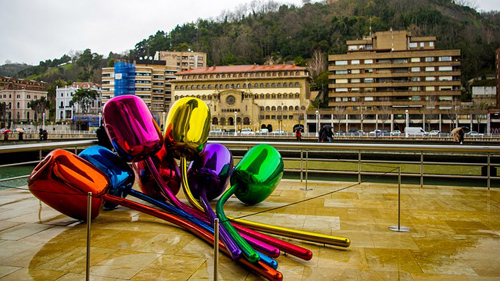 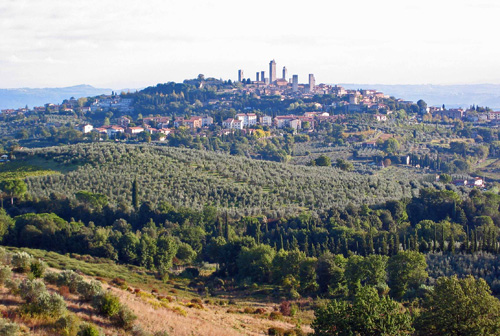 San Gimignano – The Manhattan of Tuscany