The view along Hadrian’s Wall toward Crag Lough and Housesteads Fort is one of Northumberland’s best known images. Yet few visitors to this wild outpost of the Roman Empire find their way to the appropriately named Wallsend, where the 73-mile UNESCO World Heritage Site comes to its end near the mouth of the River Tyne. Construction of the wall began in 122 AD. It ran initially from Bowness on the Solway Firth to Newcastle, but after a few years, was extended to Wallsend. It remained the northern boundary of Empire for 300 years, until the inevitable decline led to its abandonment.

Over the centuries, most of the stones of the wall were removed for use in other constructions. In the 19th and 20th centuries, the ruins of Segedunum Fort, at Wallsend were buried beneath the streets of terraced dwellings built to house the coal miners and later the shipyard workers who created Britain’s industrial wealth. Demolition of these streets during the 1970s permitted detailed excavations of the site, which revealed a fort and settlement as extensive as any along Hadrian’s Wall, and all within an urban setting. 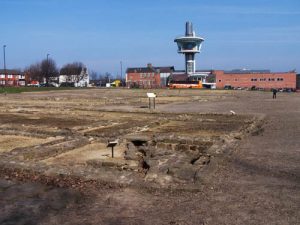 The site of Segedunum Fort is well signposted and easily reached from the centre of Wallsend. The Metro and bus services from Newcastle stop within a three-minute walk of the fort. The Museum and Visitor Centre is dominated by a 35-metre-high viewing tower, which commands an uninterrupted, panoramic view over the site and along the River Tyne toward Newcastle. The glass-walled viewing room seats up to fifty visitors and offers screens on which interactive displays can be studied.

The ground floor of the museum is laid out as a reconstruction of one of the fort buildings, and contains informative displays of the archaeology of the site, the granary, hospital and barracks, as well as the civilian life of the period. Many unearthed artefacts are also on view. A model shows what the fort may have looked like in its prime. On an upper floor, the more recent histories of coal-mining and shipbuilding are illustrated. 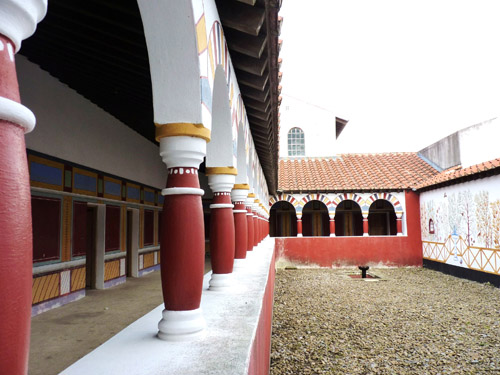 Visitors can enter the area of the fort and marvel at its size, as they wander around the foundations of the various buildings, which include the Headquarters, Commanding Officer’s house, granary, water tank and barracks for infantry and cavalry. Just inside the entrance gate is a monument decorated with the names of some of the 15 000 soldiers who built the wall, names discovered during excavations at various places along its length. Outside the boundary fence is a small section of the Branch Wall that linked the fort to the river, where Hadrian’s Wall finally came to its end.

The south-west corner of the site is occupied by a reconstruction of the Bath House. The large changing room leads into cold, warm and hot bathing rooms, the last of which was effectively a sauna. Not only was bathing a social event, so was use of the latrines, as demonstrated in a small side room. 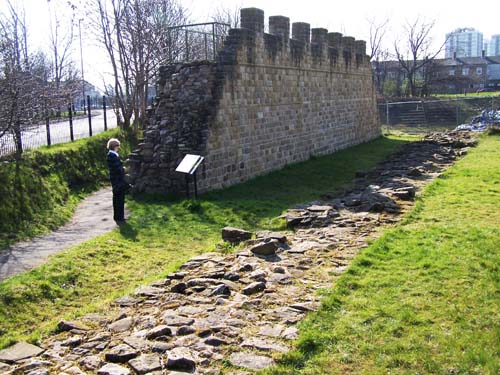 The north-west corner gate opens onto a road, over which a pedestrian crossing leads to another enclosed space, where the capped shaft of the Wallsend B colliery marks the place from which high quality coal was once sent across the world. Adjacent to this is an excavated length of wall, and a section reconstructed to its full height of 3.5 metres, which gives an impression of how the complete wall might have looked.

Situated four miles from Segedunum, above the south bank of the Tyne, Arbeia was built in 160 AD as a fort to watch over the mouth of the river. It was later extended and re-organised to become the main supply base for the seventeen forts that guarded the length of the Wall, and remained as such until this northern outpost of empire was abandoned in the fifth century. 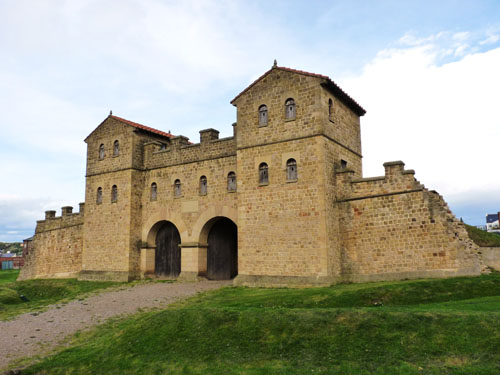 By the nineteenth century, the site had become buried beneath fields. Then, in 1875, it was sold for housing development for a rapidly growing industrial workforce, during which the foundations were re-discovered. The succeeding archaeological excavations were among the earliest to be carried out on Roman sites in Britain, and in 1881, part of the area was opened as a Roman Remains and People’s Park. More excavations were undertaken in the late 1940s, and in 1953, the first museum was opened. As surrounding houses were demolished, archaeological digging could resume, and since 1983, excavations have been carried out here every year.

Entry to the site, which is open from April until the end of September, is through the small museum, and is free of charge. One is greeted by a reconstruction of a Roman burial and a collection of altar stones and tombstones. One of the latter commemorates Victor, a Moor and former slave from North Africa, while another honours the memory of Regina, also a freed slave who became the wife of her master, Barates.

Another room houses a gathering of small items, such as spear heads, harness fittings, keys and axes, as well as more decorative finds like brooches, pins, beads and bracelets. This is one of the largest collections of personal items dating from Roman times. There is also a ring mail suit, unearthed in 1997, the most complete such garment found in Britain. 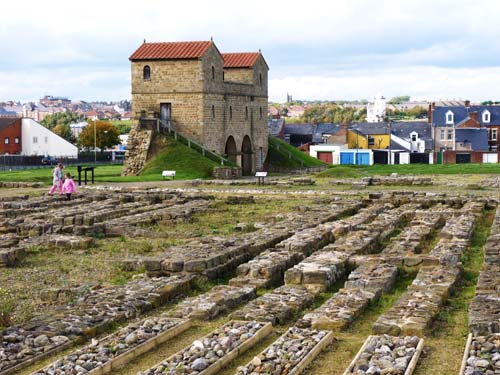 On entering the site, one’s attention is immediately drawn to the reconstruction of the West Gate, which was completed in 1988, and stands on the foundations of the original gate. One can enter the building and climb to the battlements, which afford a view over the full extent of the fort. The River Tyne can be glimpsed beyond the houses a short distance to the north. There is also a model of the fort as it may have appeared in 207-8 AD.

Excavation of the main site has revealed the streets and the locations of the granary buildings, which stood at a similar height to the West Gate. The Headquarters of the original fort was itself later converted into a granary. The foundations of the offices, barrack blocks and strong room are visible, as is the courtyard, which was probably used mainly for ceremonial and religious purposes. 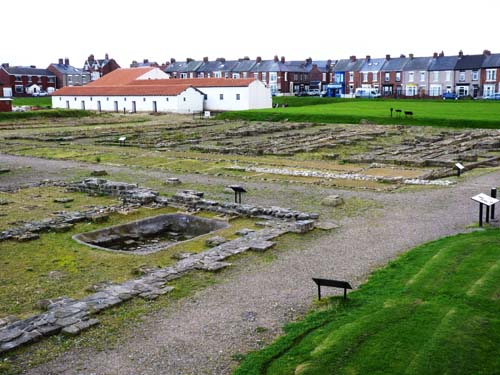 The southern part of the site is occupied by reconstructions of the barrack blocks, which include the soldiers’ quarters, bedrooms and latrines. The Commanding Officer’s house consists of a garden and covered walkway, bedrooms, living rooms, offices and a large dining room in which guests would have been entertained. The walls of these reconstructed buildings have been decorated as they might have been during the Roman occupation. There is a case containing fragments of the original plaster wall coverings that were unearthed during excavations.

The barrack blocks and West Gate should be seen in conjunction with the similarly reconstructed Bath House at Segedunum. Together, they provide a good illustration of the living conditions enjoyed by the Roman soldiers. Alongside the museum is the Time Quest building, which is used for educational visits, and contains hands-on displays designed to introduce children to some of the techniques of archaeology.