With the electric gates behind you take a left onto Duke Street, continuing (in a south-east direction) along Upper Duke Street before turning left onto Rodney Street where, further up on the left, number 62 is located: a total of 480 metres away. 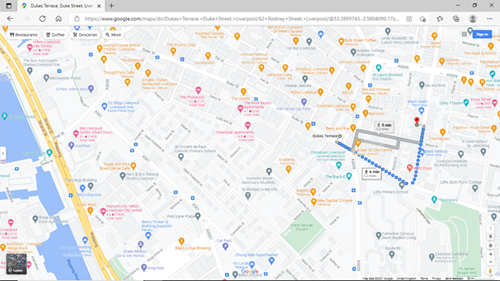 The street was named in honour of Admiral Lord Rodney, who (as the most celebrated naval commander of the pre-Nelson age) masterminded British naval supremacy in the West Indies, thereby helping to uphold the slave trade. Yet it’s the above-listed address which is of especial interest.

This Grade II-listed building was commissioned by Sir John Gladstone (1792), a Leith-born, Liverpool-based slaveholder (owner of over 2,500, Laurence writes in Read the Signs – Street Names in Liverpool Connected to the Trade in Enslaved Africans, across ‘his forced-labour camps in Jamaica and Demerara’), who was an ally of the aforementioned Huskisson. Together, they lobbied in support of absentee landlords with assets in the West Indies (a region comprised of islands, territories and countries with coastlines on the Caribbean Sea and Atlantic Ocean that was the original jewel of the imperial crown), but it was Huskisson whom attempted to prevent slave emancipation from becoming a parliamentary issue, first by denying a petition that the enslaved were cruelly treated (stating in the House that the 1823 slave rebellion in Demerara ‘had not arisen in consequence of […] cruel treatment’), and second – as Secretary of State for War and the Colonies – by supporting the Slave Laws Consolidation Act (1828).

As the inscription within a rectangular lead plaque to the left of the front door illustrates, William Ewart Gladstone was born in 62 Rodney Street, and was afforded through his father’s wealth and status as a plantation owner, a privileged education (at Eton and Oxford) that paved the way for a glittering political career. William repaid this debt with his maiden speech as an MP, an example of pro-slavery apologia delivered shortly before the final reading of the Slavery Abolition Bill, and in the wake of the 1833 Act sought higher reparation payments for members of the plantocracy. Sir John – the town’s inaugural chairman of the West India Association, lest we forget – received over £105,000, equating to around £80m today, the largest of all claimants according to the Legacies of British Slave-ownership project; the government allocated £20m (modern equivalent of £17bn) to over 46,000 slave-owners as “recompense” for the (purported) loss of their “property” (those over the age of six were “apprenticed” as unpaid labourers by their former masters for a period of time before being fully emancipated), specifically 800,000 enslaved persons across most but not all of the colonial empire. A short-lived tweet by HM Treasury revealed that it took until 2015 for taxpayers to clear the debt from the 1835 bailout.

This sin of commission is compounded by a sin of omission, chiefly the Liberal PM’s lack of zeal for anti-slavery campaigns in Africa, though it’s the former (namely what historian Roland Quinault describes as ‘dependence’ on and ‘deference’ towards his father, thereby giving birth to a semi-racialist outlook, rather than ill-judged comments pertaining to the confederation of American slave-holding states creating a breakaway ‘nation’ in 1862) that compelled the University of Liverpool to rename one of its halls of residence (June ’20). It was announced in April 2021 that, in the aftermath of a student poll, the accommodation block will be renamed in memory of a late local anti-racism campaigner: Dorothy Kuya. Research conducted by Laurence and others in the Liverpool Black History Research Group into the Royal Institution (1817), forerunner of UoL, illustrates that more than two thirds of its founding shareholders – including the likes of the Gladstones and Heywoods – had family links to the slave economy; another member of the Universities Studying Slavery network is Liverpool John Moores, which has – through the Mechanics’ Institute (1835), its earliest antecedent school – institutional links to slavery through some of its founding fathers, such as Huskisson, Gladstone Snr. and William Brown.

The Huskisson Statue on a slave’s guide to Liverpool