Standing/seated in a similar position to that of the photographer by the Viewing Window, with the Sugar House steps to your left, turn right and make for the bus terminus along Custom House Place before turning left, passing underneath the pedestrian bridge and heading straight onto Hanover Street. 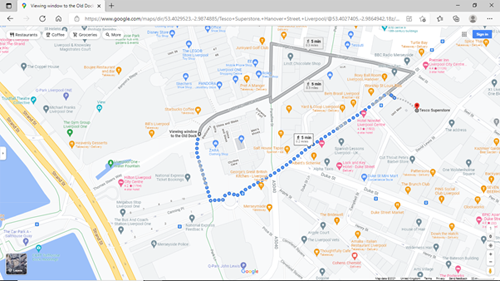 From here it’s less than 500 metres to Seel Street. There’s no sign to indicate the exact street yet Tesco acts as a signpost-of-sorts given it’s at the traffic lights nearby where you cross the road, continuing in the same direction (south-east) until you spot the (now incomplete) art installation fixed to the store wall on the right. 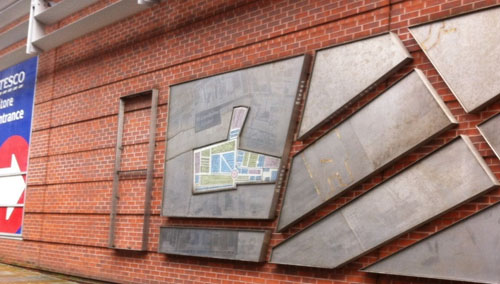 It depicts the market gardens that occupied this site which belonged to eighteenth-century tobacco merchant Thomas Seel: a man who became so prosperous by trading in African captives that he commissioned Steers of Old Dock fame to build his house in the salubrious surroundings of Hanover Street; between 1715 and 1758, Thomas Seel Senior and Junior were collectively involved in a total of 24 voyages according to the Slave Trade Database, the digital archive of approximately 36,000 slaving expeditions between 1514 and 1866. The missing section did refer to Seel’s wealth being partly accrued from the ‘dreadful slave trade’ yet was nonetheless removed (10 June ’20). Seel Street subsequently featured in a(n August ’20) Liverpool City Council list of (twenty) streets earmarked for reinterpretative plaques explaining links to slavery, but the rapidity with which property owner Liverpool ONE acted was due to an event that took place days earlier in Bristol, specifically the felling of the statue of slave trader Edward Colston (7 June). 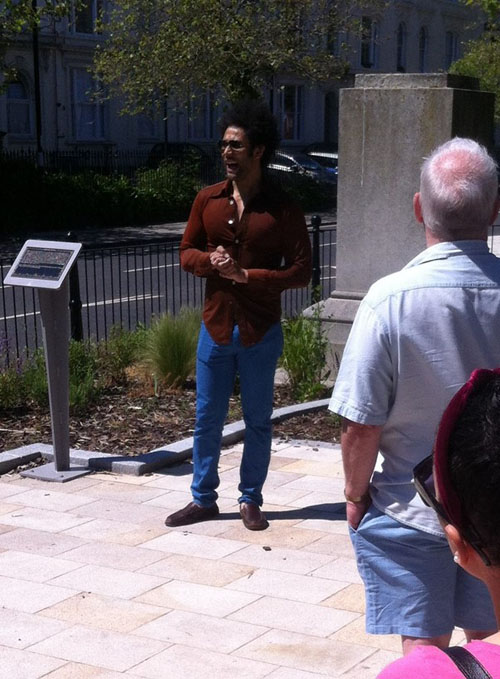 Pulling down Colston’s effigy is considered the most radical act to date by Britons confronting the legacy of slavery, although it might surprise some to learn that another figurative statue was toppled in an extraordinary moment of iconoclasm thirty-eight years earlier in the heart of Britain’s longest-standing Black community: William Huskisson’s. The empty plinth remains standing on the (northern tip of a) boulevard separating Princes Avenue and Princes Road in Toxteth, with the only alteration from July 1982 being a plaque stating that the pro-planter Member of Parliament (MP) for Liverpool (1823-30) supported mere gradual amelioration – rather than immediate emancipation for slaves – of slavery in the British Caribbean. This fact isn’t acknowledged on the re-erected Grade II-listed bronze statue (1846) in the gardens of Duke’s Terrace, however, which is 650 metres from our place of interest on Seel Street: reachable – though not always accessible – by taking a left back onto Hanover Street, heading in the direction (south-west) of the bus terminus yet turning left beforehand onto Lower Duke Street, followed by a gentle incline 480 metres (south-east) towards private gates on the left. 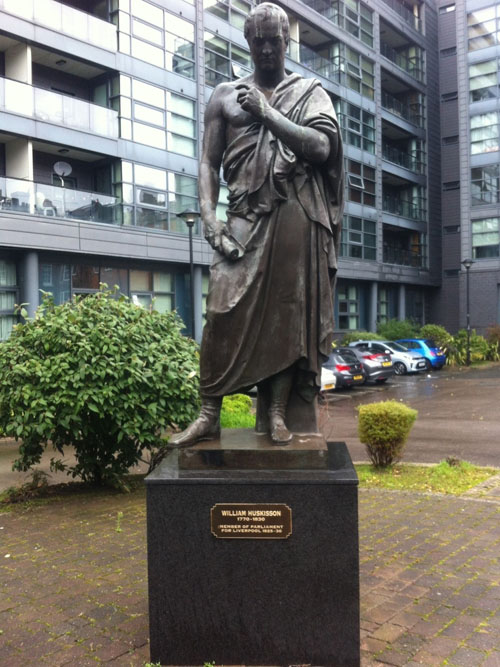 Laurence points out to tourgoers (as featured) that Huskisson was once anti-slavery, having voted in favour (as MP for Liskeard) of abolishing the slave trade in 1807, yet ‘Big Sugar’ lobbied – à la ‘Big Oil or Big Tobacco’ today – him to oppose the abolition of slavery when representing the town of Liverpool. The re-erected statue in Duke’s Terrace was commissioned after Huskisson’s death during the opening ceremony of the Liverpool-Manchester line in September 1830, which was the first widely reported fatality of the railway age. Although there’s currently little clamour for its removal from public display, innovative options such as turning it to face a wall in shame (what sculptor Antony Gormley suggests Oriel College, Oxford, could do with Cecil Rhodes’ statue) or laying it on its side (the fate befallen Colston at Bristol’s M Shed museum) are possibilities in the wake of any petition(s). 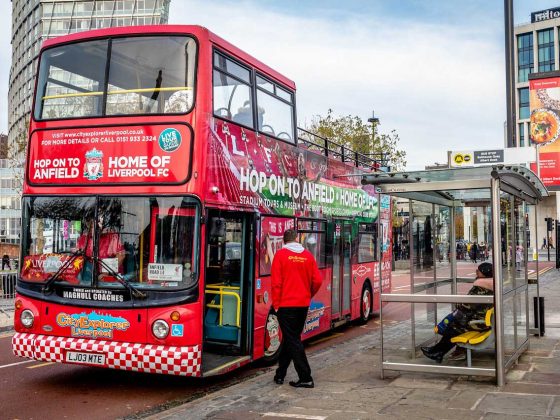 Liverpool’s Rodney Street and its place in Slaving history