In a recent Independent article entitled ‘Why tourist boards need to stop whitewashing the UK’s international image’, writer Rajan Datar laments the ‘diversity deficit [in] travel branding’. Given a cursory search of the VisitBritain website sadly confirms a lack of information that could be considered inclusive, visitors to Liverpool interested in learning more about Black British history are encouraged to incorporate into their itineraries – alongside the birthplace of Beatle George Harrison and Penny Lane – the resting place of William Roscoe and William Brown Street, the foci of part four in my Seven-Site Circular Slavery Trail.

With the plaque directly in front of you, turn right and continue in the direction originally headed (north) before stopping at number 62 since, on the opposite side of the road approximately 50 metres distant, is number 35 Rodney Street, the one-time home of William Roscoe. The solicitor-scholar was the solitary Liverpool MP (1806-07) to have voted in favour of William Wilberforce’s motion to abolish the slave trade: an act of considerable courage given his native town wasn’t only the entrepôt of racial slavery par excellence but one that spearheaded parliamentary resistance to abolition; more counter-petitions were submitted from Liverpool (where 1 in 8, or 10,000 persons, were dependent upon the “Guinea” or “African” trade by 1790) than Bristol and London combined. Supporting immediate rather than gradual abolition (together with support for Catholic emancipation) cost Roscoe re-election in 1807, although breaking of his election pledge (save support for compensation relating to losses sustained by investors) wouldn’t have surprised literate contemporaries because his repugnance towards the trade was evident in a poem written aged 18, entitled Mount Pleasant (1777, followed by The Wrongs of Africa, published in two parts in 1787 and 1788), which is the name of a road where Roscoe was born and is buried, roughly 480 metres away, 320 of which are downhill after turning left at the junction with Clarence Street. 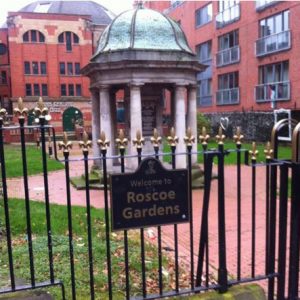 Return to the crossroads after a detour to the memorial in Roscoe Gardens, only this time continue (north) onto Clarence Street. The 160-metres-long street is home to three different places of learning – Pleasant Street Primary School and Nursery, Liverpool Community College and Liverpool John Moores University – yet even those versed in History may not know it was named after the Duke of Clarence (one of the ‘wretched apologists’ Roscoe alludes to, albeit indirectly, in part one of the two-part poem) exclusively for his zealous defence of enslavers’ interests; a street was customarily named after the landowner, not simply in honour of their being a slave trader, yet the future King William IV (who visited the town in 1790, when Clarence Street was being laid, nine years before his vitriolic speech in the House of Lords) was honoured with the freedom of the borough for opposing the freeing of Africans. This fact notwithstanding, the street isn’t one of the first twenty identified by the Council as requiring a public notice.

With no germane points of interest between here and William Brown Street, continue (north) along Russell Street before turning right onto Seymour Street and then left (west) on London Road which leads, after crossing the traffic lights where Lime Street meets Commutation Row, onto William Brown Street and towards the Walker Art Gallery, inside of which currently hangs a portrait of Richard Gildart (1671-1770). The slaver, says the accompanying caption, ‘forcibly transport[ed] thousands of people kidnapped in West Africa to Virginia in North America and to the Caribbean’. Gildart was the town’s Mayor on three occasions and elected MP for two decades (1734-1754), underscoring the centrality of slavery to – and thereby the creation of a “slavocracy” within – Liverpool’s body politic. The chief reason the 1768 oil painting is on display is because of its artist: Joseph Wright of Derby. That the celebrated artist’s commission was paid for by ill-gotten gains has, however, led to questions about its continued hanging. Should it, the museum inquires, remain on the gallery’s wall? (The Wirral’s Lady Lever Art Gallery, one of seven venues comprising National Museums Liverpool, invites similar feedback in relation to its recent repositioning of an oil painting of Catherine-Marie Legendre featuring an enslaved African boy; conversely, the University of Liverpool’s Victoria Gallery & Museum isn’t currently displaying Wright’s painting of Charles Goore, two-time Mayor and a founding member of the Company of Merchants Trading to Africa, which replaced the bankrupt Royal African Company in 1752, though National Museum Wales plans to redisplay a portrait of Thomas Picton once the legacy of the governor of Trinidad has been “re-frame[d]”, while the National Gallery declares it won’t remove any works, one being Joshua Reynolds’ portrait of Banastre Tarleton, a pro-slavery politician and friend of the aforementioned Duke of Clarence.)

The Central Library and World Museum (featured above) are further along (from the Walker, which is only partially in view, located as it is to the right of the domed rotunda roof), respectively 965 metres to 1 kilometre away, yet half of this is downhill. Together, they form part of one of the most impressive collections of neo-classical buildings in the country, though remain physical reminders of the town’s role in the nineteenth-century imperial economy. Their construction (1857-60) was funded (£40,000) by Irish-born merchant-turned-MP William Brown (leading the thoroughfare Shaw’s Brow to be correspondingly renamed), whose wealth from Deep South plantations was so vast it led Radical politician Richard Cobden to remark: ‘There is hardly a wind that blows, or a tide that flows in the Mersey, that does not bring a ship freighted with cotton or some other costly commodity for Mr Brown’s house’. Slave-accrued funds helped to finance the construction of the Grade-II listed Hargreaves building (on Chapel Street) which served as an office for William’s banking firm, Brown, Shipley & Co. Designed in the style of a Venetian palazzo, it’s unsurprising that one of the eight sandstone heads in high relief depicting “explorers” associated with the history of the Americas is the Genoese navigator Christopher Columbus: a figure more lambasted than lauded nowadays given the wave of destruction ushered in by his landing, leading to a petition seeking the removal of his statue from Sefton Park Palm House (included below). 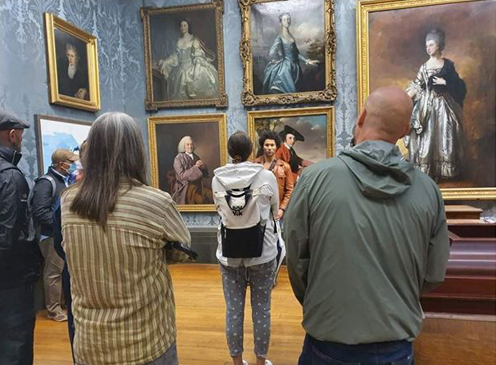 Since Brown isn’t the only historical figure to display a combination of (dark) business acumen and civic duty, it poses a question: can the spending of discreditable funds on a creditable cause buy moral absolution? (The installation of an ‘Eric Lynch Slavery Memorial Plaque’ – named in honour of the late Black community activist and educator who passed the tour-guide baton to Laurence – on the World Museum was approved by the Council in Jan ’21.)