“Pittsburgh? Really?” I asked, not high on enthusiasm. After nearly two years without travel (the one exception having been two 40-mile trips late last winter to the nearest pharmacy then dispensing Covid vax), a hoped-for Great Lakes cruise had failed to happen. Emerging from a seeming eternity of courage-sapping isolation and Zoom fatigue, we wanted to get away, but maybe not too far.

A week in Pittsburgh was my husband, Robin’s idea. It’s just 260 miles – half a day — from our home in Harrisonburg, Va. Robin, having grown up in Buffalo, NY (a city, like Pittsburgh, with a blue-collar, old industrial vibe), he said Pittsburgh was the only major city in the Northeastern U.S. he’d never visited. I had not either, but envisioned steel mills and smokestacks. Yet, a change.

So in mid-July we headed up a mostly-bucolic stretch of I-81 past farms and fields, on through slivers of Maryland and West Va., where foliage became somewhat greener than at home. Had lunch — granola with yoghurt — at a café in downtown Omps, just over the W. Va. border on 522, then followed that road to Breezewood, Pa., entered I-70/76 and traversed the nearly mile-long Allegheny Tunnel, which marks the Eastern Continental Divide. We were not far from Pittsburgh, but with the iPhone charge low, I, navigating, got confused by thinking wrongly that Pittsburgh was east of us (the direction we’d customarily traveled on trips north. When I posted that mistake on Facebook, a friend replied, “Doofus!” True.) Finding ourselves 50 miles beyond our destination as sunset neared, we spent an uneventful night at an unremarkable hotel in New Castle, near Ohio’s border.

Next morning, reaching Pittsburgh, we got directional help from bystanders. A young woman advised us that Pittsburgh – as visitors quickly learn – is difficult to navigate because of its many horse-and-buggy days’ vintage, one-way streets. Ah, yes – we remembered Vieux-Quebec (the picturesque, historic part of that Canadian city) from an earlier trip, with its likewise narrow, winding one-way streets where GPS-based devices may instruct you to “turn right, here” when that’s impossible. The secret must be to expect getting lost to be part of the charm. Eventually we came to a downtown Pittsburgh café where staff served us refreshing frappés (while our car was served with a parking ticket), and pointed to our lodging in the next block.

I had booked it through VRBO, one of the main US booking agents for air B&B’s. The building had formerly been university housing. I’d call it, variously, a hotel, hostel, urban B&B (bring your food, fix your breakfast), rooming house (some guests stay for months) … though the owner perhaps considered it a flophouse. (Posted rules suggested he expected the worst, for example, “If another guest says you bothered them, you’ll be evicted immediately.”) As we entered the building (needing help with a malfunctioning lockbox), we heard shouts. A police officer had apparently arrived to evict someone who quickly pointed straight at us, demanding, “If I can’t stay, how come they’re here?” The incident ended quietly, however. Finding our apartment, I took a photo of Robin raising thumbs triumphantly between portraits of a koala bear and (we guessed) a musk ox. The apartment was quiet and clean, and all the guests and housekeeping staff were nice. A lifelong Pittsburgh gentleman helped us carry luggage and recalled his city’s bygone steel mills and smokestacks. A delightful little boy, about four, had been frightened by a fire alarm, but informed us enthusiastically that it turned out to be a false one.

I will not name the facility, because the owner, whom we never met, took advantage of my weak comprehension of the VRBO website to double-charge us for parking. When I reached him by phone and described the problem, he sarcastically refused to supply the code that would have allowed us to use the space we had paid for. Once home, we would notify our bank and be reimbursed. I nostalgically recalled earlier, lower-tech instructions for B&B’s, including VRBO’s, such as “Park anywhere, and you’ll find the key under the tongue of the stone frog on my porch.”

We were in the middle of a long drought, both at home and in Pittsburgh. Temperatures mostly reached the 90’s, with forecasts about two degrees lower than Harrisonburg’s, though city pavements added heat. 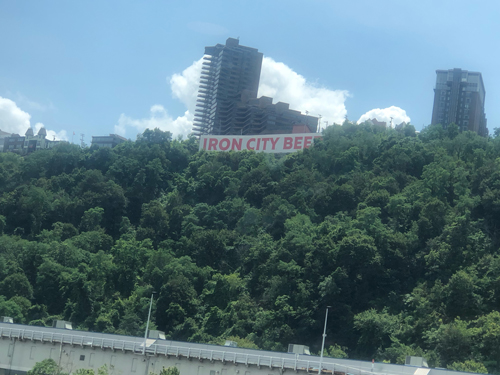 Our sightseeing began with riding Pittsburgh’s Three Rivers with the Gateway Clipper Fleet. We discovered the picturesque Smithfield Street Bridge, two blocks from our digs, is oldest of the 446 bridges in town (more than Venice), and of steel bridges in the U.S. (1883). We’d crossed it on foot over the Monongahela River from the north side, boarding our vessel to the south. Soon we were riding past The Point – the promontory, with a little park and fountain, where the Monongahela meets the Allegheny to form the Ohio.

Paris and London, as well as Washington, D.C. (near my home in decades past) all have their share of impressive bridges, but just one predominant river each. Pittsburgh may be unique, or nearly so, in having all three running through the city center (plus a fourth, flowing underground.)

A mountain slopes almost to the Monongahela. A sign on its side reads “IRON CITY BEER,” promoting a local brew, dating to 1860, in spread-out, giant letters reminiscent of Hollywood’s sign. PPG Place, the iconic glass highrise with castle-like turrets, takes its name from the plate glass factory where today’s PPG Bank originated. Near The Point is PNC Park, the Pittsburgh Pirates’ baseball park, and Heinz Field, the football stadium. The tour guide, when asked about swimming in the rivers, told us of a nice, quiet beach area with clean water, not far upstream, which we regrettably never visited.

The hourlong cruise was part of Robin’s birthday celebration. That night we enjoyed a beer tasting with an excellent dinner at Church Brew Works, with young friend Brad, a Pittsburgh musician and math tutor who had grown up in in Harrisonburg. Church Brew Works, housed in what was once a huge, cathedral-style church, was desanctified several years ago for its current use. (Remember the opening scene in “Alice’s Restaurant”? Yes, desanctification rituals are real!) Beneath a vast, medieval-style arch on the original altar, colossal brewers’ tanks are displayed. Later, at Millie’s ice cream parlor, I discovered baklava flavor with honey (to die for!) Then Brad drove us out of town to circle back through the Fort Pitt Tunnel, a ride yielding a dramatic, surprise panorama of the city lights.

Next, we rode uphill through the neighborhood dubbed Mount Washington and saw nighttime glory from several lookouts. 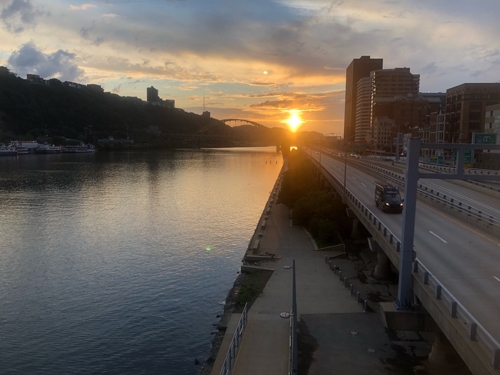 Friday night, July 16, Robin and I fortunately set out early with our tickets for the Pirates/Mets game. Though PNC Park is just a 4-minute drive from downtown, it took us 2 ½ hours to get in. There were the usual challenges finding our route, then, lengthier ones to find “Lot C,” site of our parking space. Traveling light, I carried a backpack the size of two moderate-sized handkerchiefs, but the guards checking fans in ordered me to ditch the backpack and hand-carry my belongings, which we had to stash in our hands and pockets. (Hiding my folded bag in a pocket, I may have lost a hairbrush.) In our country, somehow backpacks have become associated with terrorism in security forces’ minds, at least when they see an aging lady giving a beady eye to their officiousness.

The stadium is beautiful, as lifelong baseball fanatic Robin knew it would be. We found our seats a minute after the opening pitch, as a Mets player struck out. The stadium seemed about 2/3 full – 25,000 fans occupying the 38,362 seats – exuberant, loud, seated shoulder to shoulder and almost all unmasked except for staff. We were fortunate to be traveling during a hiatus between a steep regional decline in cases of the original Covid, and rise of the nasty Delta. Mostly I do not love large crowds, but after so much isolation the ambience was fun, a time-out from worries. The Parrot (home-team mascot) stopped and chatted with Robin at his aisle seat. He gave a peanut to the big green bird. The Pirates had been in a slump but rallied that night, despite interruption by a brief downpour. Being in front of the awning’s reach, we got totally drenched, but the temperature remained warm. The rain was something of a novelty. (There had been none for weeks at home, and the game featured Pittsburg’s only shower that week.) Jackets soggy, subs good. The broadcast was more audible from the refreshment stands than from the seats.

A confrontation that looked like a potential brawl was greeted by over-the-top cheers from the stands. We heard a Mets pitcher was offended by boasts from the Pirates’ pitcher, but the incident ended peacefully. By 10 pm, top of the 6th inning, the score was Mets 1, Pirates 2. The home crowd went wild when Wilmer Difo hit a homer.
Outfielder Bryan Reynolds hit a ball high into a stand to be caught by a fan near deep right field. Not far beyond, despite the damp, we spotted fireworks.

Moments after we began heading out, the Pirates won 4 to 1. We heard they also won Saturday’s game, though their season would not end gloriously. 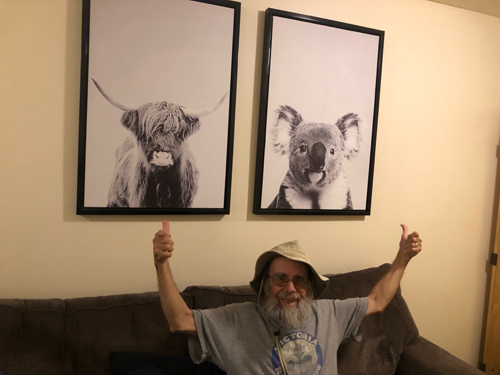 Saturday we slept late, then joined Brad, who showed us his home, a Victorian house shared with several friends in a leafy neighborhood. A gardeners’ cooperative produces food on the property and pays the tenants in produce for its use. We found a good dinner at a Nigerian restaurant called “African Cuisine” (Brad thought it needed a better name), and explored The Point, with its elegant bridge and fountain.

Sunday we got a taxi to the Carnegie Art and Natural History Galleries. Failing to work through the Uber website, we found Z Trip Taxi instead. Though panned in some customer comments, service was good except for a dispatcher’s error making our driver late. In our two hours at the Carnegie we found a totem pole, stuffed birds including a loon and a double-wattled cassowary, wonderful exhibits of Impressionists and Post-Impressionists, including a Van Gogh, and the showcasing of 20th Century Pittsburgh by the late Black photojournalist Charles “Teeny” Harris. Lunching at the Carnegie Café, we found excellent food and ambience, though that was where I read on Facebook that NPR personality Martha Woodroof, a good friend, had died that morning. She had been fighting cancer for a long time, yet it was a shock.

A challenge before heading home the next morning was moving our car from the garage. Returning from the ballgame, Robin had parked it in the nearest-to-wide-enough space available, about 1 micrometer from a monstrous iron post. I said “No way could I get that #%*£ out,” so he did — in what seemed an endless process: back up 3 inches, then turn hard left & forward 3 inches, repeat, repeat, repeat….Whew! The right rear fender and body got dinged up, but our 12-year-old hybrid remains perfectly driveable.

Now we’re thinking about future trips, and mortality. Martha was a year younger than I. Robin and I seem to have had more challenges on this trip, per diem, than on past, more ambitious journeys. Electronic, navigational, luggage-toting, automotive. . .although except for the owner of those digs on Smithfield Street (now limited, I see, to long-term rentals), we met so many diverse, helpful Pittsburghians. I’m glad for that trip, but it may be our last one that requires so much effort. I became exhausted, struggling with boring details like mobility, stairs, heat, etc. Brooding that the best may NOT be yet to come, and about the things left undone that I ought to have done. 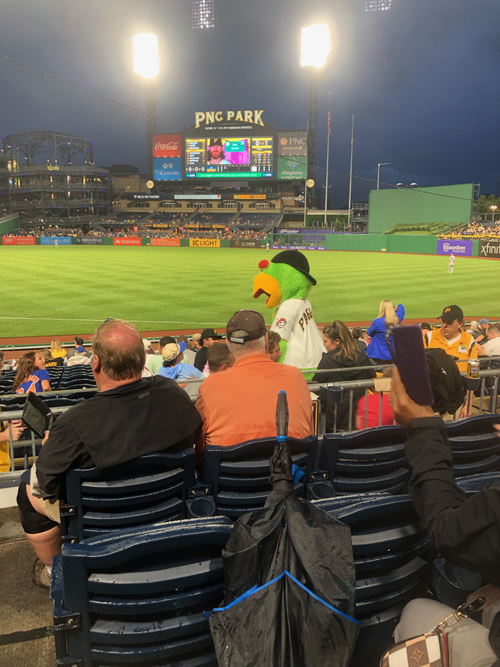 But on better days now, I ponder places we might go. Australia? The Taj Mahal? Omps, W.Va.? 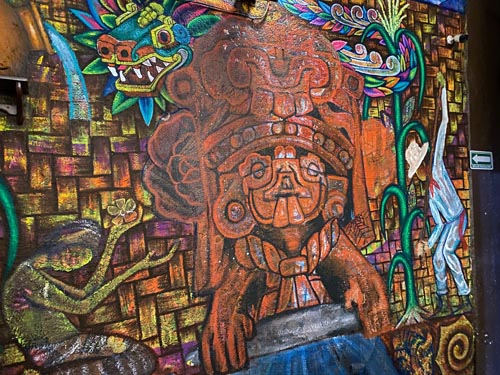