It needs a study to decide whether a country should be on the list of the most privileged people in the world or not. Things like a good working environment, workplace relationships, overall happiness, life satisfaction, the educational advantages citizens are getting, and income inequality, contribute to making a country or its people privileged.

There are 195 countries on the planet but not every country offers its citizens a private life, happiness, and satisfaction. A study conducted by ABCD Agency in July 2021 shows that people in some countries are very privileged because they create balance among geographical, economic, educational, and other factors.

Factors that play a crucial role in improving the lifestyle of citizens in any country are stability in a job, good working conditions, environment, safety, appreciative surroundings, proper facilities, etc. These factors were investigated for this study to find the world’s most privileged nations.

Top 3 Countries With The Most Privileged People in the World

Switzerland is also known as the Swiss Confederation. It is said to be a heaven on the earth because of the beautiful mountains, rivers, waterfalls, and green landscapes that it features. This country provides a true privileged life to its citizens. The study found that Switzerland is a privileged country because the climate, education, economy, and even the standard civil code are made according to the growth and prosperity of the citizens. In terms of economy, it is the wealthiest nation globally and it has the highest percentage of millionaires among its citizens. It is the 17th biggest exporter globally when it comes to GDP per capita. Switzerland came top in the list of most privileged nations, and scored top points for finance.

Iceland is among some of the small countries in the Nordic Nation cluster of Northern Europe. It covers 102,700 square kilometers of total area. Iceland has a limited population density of just 3.5 people per square kilometer, slightly more than Australia. As the population density is very low, it provides a more significant share of the overall resources in the country. It is believed that opportunities for the people increase because of the low population.

Norway is as comforting as the colors of its magnificent flag. It is a part of the Nordic nations in Europe, hence sharing numerous good qualities that its neighbors do. Norway is a small country with a total area of around 385,207 square kilometers. The happiness of its people can be perceived by the fact that the country’s population density is just 15 per square kilometer. With a GDP per capita of $68,000, the study found Norway top of the list for career opportunities and liberty and life satisfaction.

The subjects of the study are all 37 member states of the Organisation for Economic Cooperation and Development, as well as Argentina, Bulgaria, Brazil, India, Russia, Singapore and South Africa.

By evaluating a total of 19 influencing factors, the research conducted by ABCD Agency ranked the most privileged countries in the world. You can check out the complete study which includes the detailed scoring of each country with ranking and overall points. 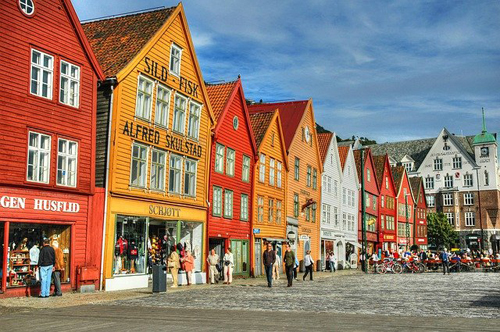 Bergen – gateway to the Fjords of Norway