Enter the realm of fairytales, a place where beautiful architecture mixes with local myths and legends. A chocolate box town brimming with history with an important connection to the Brothers Grimm. Learn about the Bremen Musicians and marvel at the medieval, gothic and renaissance architectural influences. There is so much to be found in this small town in the region of Lower Saxony that marks the end of the Grimms Brother’s Fairytale route. This is Bremen in north-west Germany. 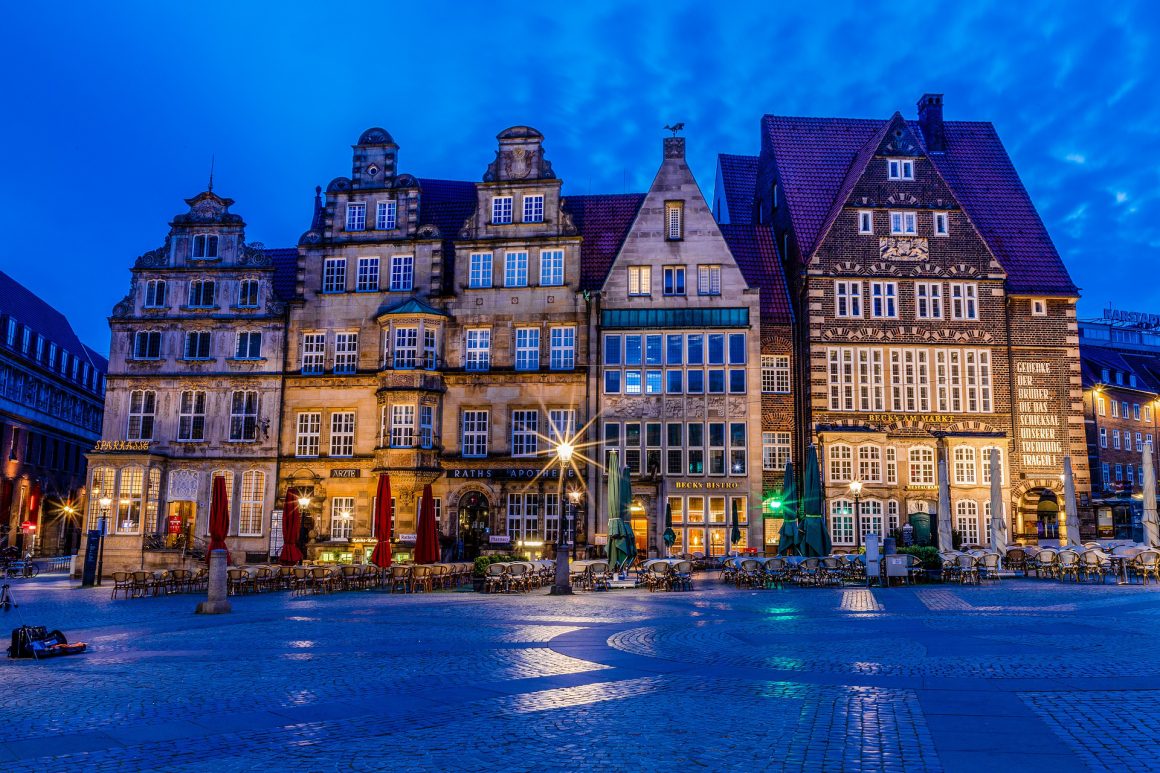 In the town’s medieval heart, you’ll find the famous Bremen Town Musicians statue, which immortalises a children’s fairy-tale from the Brothers Grimm about a donkey, a dog, a cat and a cockerel who go off in search of their fortune after being classed as tired and old by their masters. On their road trip to Bremen, they take a rest in a forest but see a light shining and come across a robbers’ house. To scare off the robbers, they all stood on top of one another to look fierce and ended up frightening the robbers away, taking the house for themselves. Although they never made it to Bremen, a bronze statue by Gerhard Marcks was erected of the Bremen Town Musicians next to Bremen Town Hall in 1953. It is said that anyone who grabs the front hooves of the donkey shall have their dream come true. The moral of the tale is that you are always stronger when acting together.

Old Town and the Ratskeller

A menagerie of historical buildings forms Bremen’s old town dominated by the Cathedral, dedicated to St. Peter, situated in the Market Platz in the centre of the town. Adjacent to this is the ancient Domsheide – a magnificent medieval square hosting several important buildings. There’s the main post office, the courthouse, the cathedral precinct with its bell, and the annex to the stock market building as well as the town hall and the seat of power for the government of the municipality and nestled in the depths of the 600-year-old town hall, next to the Bremen Town Musicians statue is the Ratskeller open house and restaurant where princes and merchants once drank and dined. Even today, this is the best place to sample Germany’s best wines. This upmarket restaurant and pub is steeped in history. Drinkers congregate at the small tables and soak up the atmosphere in the hall, while diners converse in their groups on long tables, their laughter echoing around the ornate hall. The best tables are found in the secluded booths, known as Priölken clustered around oak barrels where barons and merchants once bartered their trade deals. The walls are adorned with unique frescoes telling the history of the town. Down in the cellar, Germany’s oldest cask wines mature undisturbed. Lit only by candlelight, the smell of the centuries-old wine within the casks pervades the nostrils. The most precious of all wines lies beneath a rose painted on the ceiling – the vintage Rüdesheim from 1653 which can be sampled only by the cellar master and the current mayor of Bremen. Queen Elizabeth II of Great Britain tried a thimble’s worth during her state visit to Bremen in 1978. 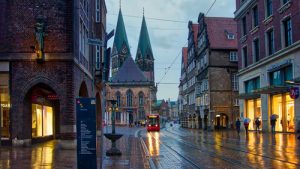 Several upmarket four-star hotels can be found amid the winding streets in the heart of old Bremen. Just one-minute walk from here, in the Böttcherstraße, the heart of oldtown Bremen, is the Atlantic Grand Hotel Bremen with a range of rooms and suites. Cocoon yourself away from the cacophony of the streets with soundproofed windows, a comfortable seating area and work desk. The spacious bathrooms have a bath or shower. The hotel has a spa area with sauna, steam room and gym with modern fitness equipment. Enjoy German and French specialties at alto restaurant and relax in the lobby bar and smoking lounge. Alternatively, the modern DesignHotel ÜberFluss is a stark contrast to all the history of the city. Minimalistic yet elegant it can be found by the river Weser with a wonderful rooftop terrace. It offers a place to rest in designer rooms and also a sanctuary for the senses with a spa and indoor pool, sauna and historic relaxation room.

Staying in these central locations allows one to further explore the historic city and for many, the journey begins at the Haufenbahff Central Station, a beautiful example of architecture. Inside are food and drink stalls including some of the most delicious pizza for just over two Euros before you catch a train or tram further afield. Conveniently located next door to this grand station is the favourite hotel of business travellers – the Inter City Continental. Flemings Brasserie restaurant offers a selection of seafood, vegetarian and grilled items and just a 15-minute stroll from the old town.

An advantage of staying in the heart of Bremen is you are always close to the shops. Nearby shopping experiences include the Böttcherstraße – a 330 ft long walkway, famous for its unusual architecture and ranks among the city’s main cultural landmarks and visitor attractions. Built between 1922 and 1931, after Ludwig Roselius, a Bremen-based coffee-trader, charged Bernhard Hoetger with artistic supervision over the project. The street and its buildings are a rare example of expressionism and are protected.

Other areas of interest include Dechanatstraße – home to Breman University of the Arts music faculty and Violenstraße – where memorials to persecuted Jewish people from World War Two can be found in the ‘stumbling stone’ brass plaques in the pavement in front of houses where they lived. All these sites are easily connected from this square by foot, tram or Uber.

The Arena Messe Hall is home to the Bremen football team and a convention centre that hosts many exhibitions, such as the International Fish Show where you can sample weird and wonderful marine dishes including curried cod, smoked herring, salmon, octopus and caviar cocktails once a year.

If you are prepared to explore further, Villa Linnenschmidt offers elegant and luxurious classical-style hotel rooms in a quiet suburb of Bremen, about 30 minutes by foot, car or by public transport from the old town. Set in an attractive red-brick building, the generously sized rooms at the property feature elegant décor and antique-style furnishings and soundproofed rooms with modern flat screen televisions.  Guests are welcome to use the on-site fitness centre at Villa Linnenschmidt. There is also a golf course nearby. The train station 1.2 miles from the property and the A27 motorway can be reached in 5 minutes, with free parking available on site.

There are plenty of places to eat in Bremen. Begin with a restaurant serving meatless dishes called Vegefarm on Hamburger Street – the irony is not lost. Serving Chinese and Taiwanese alternatives for vegans and vegetarians, they have seemingly invented the vegetarian prawn which tastes just like the real thing as well as veggie pork and chicken. Meanwhile, just around the corner from the cathedral is Kervan, a Turkish restaurant offering the tastiest grilled meat. Simplicity and budget food is freshly cooked as you wait. 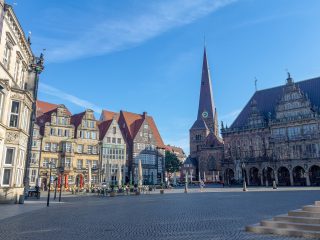 Those looking for a treat will enjoy the Suedtirolerhuette offering authentic South Tyrol Austrian food in the heart of Bremen, which evokes the feeling of an mountain hut in the heart of the city. Cosy up on the warm fur lined chairs and feast on authentic Italian from the Tyrol region.

If you are feeling flush and after fine food, the town has three restaurants mentioned in the Michelin guide. Al Pappagallo serves classic Italian in its winter garden, while Das Kleine Lokal, a small basement restaurant with only 34 seats serves fine dining cuisine with delicious dishes of duck, game, lamb and fish as well as vegetarian options. Finally, Wels is renowned for its catfish (Wels) aquarium, from which it takes its name. As well as catfish, its specialities include Bremer Knipp sausage, labskaus hash and Oldenburg duck.

During the colder months Bremen becomes a winter wonderland. Families glide on the ice rink created in Bremen’s medieval square and a festive market presides over the historic square. The air is filled with the aromas of freshly roasted almonds, traditional gingerbread cakes and mulled wine and over a hundred stalls. In the weeks before Christmas, the popular riverside promenade becomes the setting for the historic Schlachte-Zauber winter and maritime market. From organ recitals to nativity plays, magical theatre shows and festive exhibitions: a varied programme of festive events for all ages is organised each year by Bremen’s cultural institutions.

If you are staying longer than a weekend, then get out and explore the Grimms Brothers Fairytale Route. This route begins in the birth city of the Brothers Grimm Hanau, where a monument to Jacob and Wilhelm stands on the market square Neustädter Marktplatz on a journey to more than fifty places celebrating fairy tales and legends all the way to Bremen.

How to get there

A trip to Bremen, which is just a short flight from London Stansted Airport, makes a perfect weekend trip. You can enjoy the beauty of this magical city and its rich heritage for less. A direct budget flight is easily affordable and accessible in just under an hour-and-a-half.  Once you arrive, everything is accessible by a direct and frequent tram service to almost anywhere. Famed for its excellent transport connections, everything feels local.  From the airport take the number 6 tram towards the Universitat and get off six stops later at Domsheide – a major square located east of the MarktPlatz and south of Bremen Cathedral and explore from there.

Donna can be contacted on [email protected] check out her other work at https://muckrack.com/donna-richardson-3